MI vs KKR Preview: Kolkata out for revenge against Mumbai

It really shouldn’t have come to this. Kolkata Knight Riders should have been at second place and Chennai Super Kings should have been facing off against Mumbai Indians in the first ever IPL Eliminator at the Wankhede Stadium.

It really shouldn’t have come to this. Kolkata Knight Riders should have been at second place and Chennai Super Kings should have been facing off against Mumbai Indians in the first ever IPL Eliminator at the Wankhede Stadium. But because of one horror over, fourth-placed KKR now go up against MI for the second time in four days and it’s safe to say that the hosts are the ones who will carry a definite psychological edge after the stunning finale at Eden Gardens on Sunday night.

This time MI will play hosts, and have the home advantage they would like to exploit. Andrew Symonds is expected to slot back into the line-up in place of Ray Price, as is Munaf Patel. That leaves the decision of who will partner Sachin Tendulkar; MI have struggled all season to find the right man for the job and no one has stepped up adequately. Knowing Tendulkar, the team is unlikely to make any experiments so in all probability the job will go to the struggling Tirumalasetti Suman.

If Lasith Malinga gets his yorkers right – he has not done so for some time now – and Munaf manages to land the ball in his special zone then KKR will find it tough to get away freely against the backdrop of a boisterous stadium. Malinga was taken to the cleaners by Shane Watson in the last match played here and MI fans will hope the Sri Lankan slinger nails his darts. Harbhajan Singh too could do with some wickets. 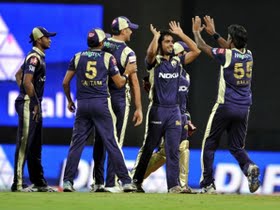 Gautam Gambhir has spent much of his time since Sunday defending questions about the shock defeat to MI and whether or not the decision to give the final over, with 21 to defend, to Lakshmipathy Balaji was a good one and whether KKR have managed to overcome the loss. He has played it back with a straight bat so far, but Gambhir knows that to come back from a defeat like that, and on the opposition’s home turf, will require something special. KKR have never reached this far in the competition whereas MI made it to the final last season. Knowing how to keep your wits about you in such a situation can mean a lot, and that’s where KKR could slip.

It’s now that the experience of Jacques Kallis and Brett Lee will be called on. Kallis too has been to the knock-offs twice, with Royal Challengers Bangalore, and KKR will hope he performs better for them than he did for his previous franchise at this stage of the competition. A fluent knock from Kallis can hold the innings together and allow Manoj Tiwary and Yusuf Pathan to open their shoulders, much as what transpired on Sunday evening. Similarly, if Lee has a good night with the ball then the likes of Pathan and Iqbal Abdulla have a better chance of picking wickets.

Asked if would be possible for KKR to bounce back from a demoralising defeat like Sunday's, Gambhir was practical. "We have to do things the hard way. But we know they are beatable, if we play good cricket."

Solid words from a tough customer. Good cricket is indeed needed. Can KKR pull it off?