England pacer James Anderson was extremely pleased with the manner in which he bowled to claim another five-wicket haul at the hallowed Lord’s as India were rolled over for 107 on another day where constant rain made matters worse for them.

“I think that if we bowled like that today, with those conditions, we'd bowl most teams in the world out - because I think we were that good," Anderson was quoted as saying in espn.in.

"We hardly bowled any bad balls, we didn't give them much to hit at all - and when you build pressure like that all day, no matter who you are around the world, it is difficult,” the England spearhead went on to add. 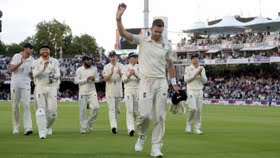 Anderson also praised Chris Woakes, who chipped in with two wickets to ably support Anderson."He's worked really hard, he's still been around the squad the last few weeks, and missed out last week.

"But he's a world-class performer on his day. We've seen it before, all round the world, one-day cricket, Test match cricket - he's a brilliant bowler, a brilliant all-rounder, and someone who can do a fantastic job for this team,” Anderson went on to state.