In focus: Sri Lanka in desperate need of fresh talent

Sri Lanka recently finished their long and rather disappointing tour of England. When Angelo Mathews' men headed to the English nation, not a lot was expected of them. But, the visitors wouldn't have imagined that they would return with not a single victory.

Sri Lanka recently finished their long and rather disappointing tour of England. When Angelo Mathews' men headed to the English nation, not a lot was expected of them. But, the visitors wouldn't have imagined that they would return with not a single victory. Their only international wins came against Ireland, which doesn't count for much. Expect for a tie in the first ODI, they never really competed at any stage. And while they were expected to struggle in the Tests, there were better hopes from the Lankans in the shorter formats. They have got the better of England in the past in ODIs and T20s even while playing away from home. But that was far from the case on this tour.

Right from the start to the end, Sri Lankan skipper Mathews emphasised on only one aspect -- that of how the team has failed to perform as one unit. There were days on the tour when their batsmen flourished, but bowlers let them down, and vice versa as well. Their fielding, a factor they once prided themselves on, has also taken a hit. There was never match in which all of these departments came together and performed in unison. That is specifically the reason why Sri Lanka have struggled to make any kind of impact of the tour. They were especially found out in the Tests, where the opposition exploited their weaknesses.

Yet another series defeat has brought into focus the fact that Sri Lanka need to start searching for fresh faces who can infuse new spirit into the team. The explanation that they are rebuilding following the retirement of their legends is losing ground for it has been a while since that now. Some of the players have been in the team for a few years now, but haven't raised their game a lot. In the Tests, Dimuth Karunaratne has not made big enough scores for the team. Among others Lahiru Thirimanne seems to have been around for ages now, but possesses a extremely poor record, that doesn't do justice to a player of his talent.

There is a particularly bigger hole in the bowling department. Apart from Rangana Herath in the Tests, they just do not have any quality bowlers. And, Herath cannot be expected to bowl out teams in places like England. The loss of Dhammika Prasad to injury before the tour was a massive blow to the team. Among the upcoming bowlers, Dushmantha Chameera has been the most impressive, but he also missed most of the games due to injury. The rest like Suranga Lakmal and Nuwan Pradeep have been rather disappointing. Even the experienced Farveez Maharoof has failed to make an impact on comeback. 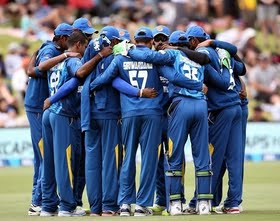 As mentioned above, fitness is becoming a major concern for Sri Lanka, which is also among the causes of their downfall. Apart from the bowlers, skipper Mathews himself and Dinesh Chandimal as well were dogged with injury woes for most part of the tour. Last but not the least, Sri Lanka need to figure out a better way to use their experienced and talented players. The vast batting knowledge of Upul Tharanga is being wasted down at number eight. Also, Dasun Shanaka who has the potential to be a good all-rounder, is not given enough overs or bats too low. These are minute aspects Sri Lanka need to look into as they endeavour to revive their fortunes.