Former Australian fast bowler Mitchell Johnson feels that Indian skipper Virat Kohli is ‘frustrated’ since he is not being able to score runs in the ongoing Test series against the Aussies.

"He's obviously quite passionate, but I just think he's frustrated because he hasn't scored runs and he's letting his emotions get the better of him," Johnson said in his blog on foxsports.com.au.

Johnson went on to write, "You could sense the vibe change halfway through the match and it coincided with India getting ahead in the game. 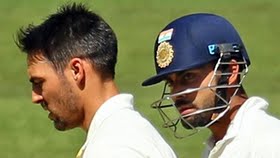 "Obviously whenever there's a wicket the cameras go straight to Kohli to see his reaction - they know they're going to get those kind of reactions from him.

"And they did! He was giving a send-off to just about every player, which you've got to be very careful with. It can happen sometimes, when you're pumped up and you get a bit too fired up."

"The moment that changed everything was when he blocked a ball back to me and I threw it back at the stumps, seeing Virat was out of his crease and thinking it was a chance of a run out. The only problem was that Virat was in the way.

"He got hit in the back and I apologised straight away because it was a complete accident, but that message didn't seem to get through.”