Party poppers CSK eliminate Punjab out of the tournament

Punjab faltered at the last hurdle in the race to playoffs, as a “high on confidence” CSK rolled to an easy nine wicket win in the final match for both the teams.

Batting first, KXIP would have wanted to put on a massive score in a must win game. The Karnataka duo of Rahul and Agarwal were united once again and gave Punjab a decent start. Agarwal took the role of the aggressor early on with a couple of boundaries against Chahar in the very first over. Rahul too picked up the pace around the 4th over. Just when it seemed the pair got set, Ngidi castled Agarwal in the 5th over.

That brought a quiet phase in the innings, which lead to another bowled dismissal, this time in the form of Rahul. Pooran and Gayle too were dismissed in successive overs to Thakur and Tahir respectively as Punjab were in deep trouble then. The score at the end of 12 overs was 73-4, and the onus was on in-form Mandeep to power them through with Hooda. Mandeep hit only one boundary before getting dismissed by Jadeja, but it was Deepak Hooda who rose to the occasion. He took on Ngidi in the 18th over and thumped him for two sixes. He got to a well deserved half century in the 19th, and hammered 14 runs in the final over, as his side finished with a respectable 153-6. 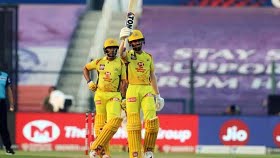 Rituraj Gaikwad was in some form and continued the good work. This time he was in the company of Faf du Plessis who began on a positive note, even as Gaikwad was taking some time to settle in. CSK raced to 44-0 at the end of five overs, and Rahul turned to Bishnoi in desperate need of a breakthrough. Faf greeted him with a four and a six as Punjab’s chances in the tournament looked bleak.

After a few quiet overs, Jordan was able to scalp du Plessis, but not before the South African southpaw had made a solid 48. That brought Rayudu to the crease, and the pair played without any fear as if they had nothing to lose. The required rate was just 7 runs per over, which was never going to pose any challenge to CSK with nine wickets in hand. Murugan Ashwin bowled some tight lines as his four overs cost only 17, though he couldn’t pick up any wickets. His partner in crime Bishnoi wasn’t having the best of days as Gaikwad struck two boundaries in his last over to bring up his third consecutive fifty. Rayudu too played his part in the chase and with Gaikwad, they romped to victory, thereby ending Punjab’s tournament.