For a man who has played only seven Tests, Cheteshwar Pujara’s batsmanship has been incredibly superb. Until the first day of the Mumbai Test, he was yet to be dismissed by England. His sticky approach to the crease is exactly what India have been seeking ever since it was clear that Rahul Dravid’s career was nearing the end.

For a man who has played only seven Tests, Cheteshwar Pujara’s batsmanship has been incredibly superb. Until the first day of the Mumbai Test, he was yet to be dismissed by England. His sticky approach to the crease is exactly what India have been seeking ever since it was clear that Rahul Dravid’s career was nearing the end. The only way to the test the same was by having the Saurashtra batsman actually play Test cricket. He passed his first ‘test’ with flying colours, constructing a match-winning fourth innings half-century in his debut Test against Australia. And, in the ongoing series against England, he has been at his tenacious best. 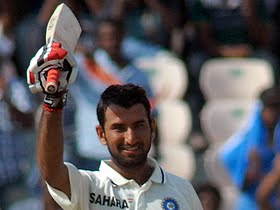 The opening day of the Mumbai Test was a huge challenge for the Indians, and among the batsman only Pujara came back with his reputation enhanced further. It was rather strange that India struggled on pitch that favoured the spinners. After all, isn’t that what skipper M S Dhoni had asked for? The Indian top and middle order were completely off-colour against an English spin attack led by Monty Panesar. The dismissals of Sehwag, Kohli, Yuvraj as well as Dhoni made one wonder whether India’s decision to ask for a turner would backfire.

If at all, India managed to stay afloat at the end of day one, it was only due to Pujara’s brilliance, and his excellent partnership with Ravichandran Ashwin. Pujara’s ton was his third in only his seventh Test, which signifies a brilliant start to his international career; one of them being a double hundred and the other against West Indies a 150 plus score. There have been two impressivehighly aspects of Pujara’s batting in his short international career so far –one he has been willing to occupy the crease for long period and has shown his hunger for big scores.

Second, and more importantly, Pujara hasn’t got bogged down during his stay at the crease. Every time there has been a bad ball, he has made an attempt to play an aggressive stroke. The big advantage the new number three has over other players is that he can play the short ball very ball. Pujara has the ability to deal with the quick bowlers in an attacking manner and, in fact, brought up his hundred at Mumbai with controlled hook shot. Years of playing domestic cricket and being on ‘A’ tours has definitely made Pujara a tougher player.

The incredible aspect about Pujara’s career thus far is that while the great man he has replaced, Rahul Dravid, took a year to register his first Test hundred and kept getting out in the nervous 90’s a number of times even after that, Pujara has already notched up three big scores in no time. Comparisons with Dravid are unworthy since Pujara has only just started, but the figures he has achieved thus far is an indication of the fact that he is a hardworking, confident cricketer. Whatever the future has in store for the young lad, his lack of effort would rarely be doubted one feels.