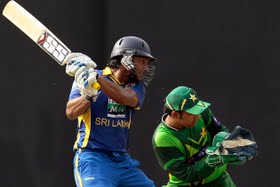 Pitch report : With the match starting at 3 pm, dew is likely to affect the side bowling second, as it has done late in both T20 games. Sri Lanka overcame this disadvantage by posting a mammoth total in the second T20, and if dew forms again, a par score may not be enough for the team batting first.

If the T20s are an indication where Pakistan and Sri Lanka stand in limited-overs cricket, fans may be in for one of the more absorbing, unpredictable bilateral ties in the year. There was everything from top-order audacity, to spin-induced collapses, outstanding catching and a lower-order resurgence, all delivered with the spark that has defined matches between these sides in recent years.
Already well-matched in Asian conditions, both teams also approach the ODIs in similar states of confidence. Pakistan had been the more match-ready side before the tour began, but Sri Lanka had their top three humming last Friday, and frontline bowlers Lasith Malinga and Sachithra Senanayake have also established form, with four wickets apiece.
For Pakistan, Shahid Afridi has married sense to his savagery with the bat, Saeed Ajmal remained menacing, even as his team-mates fell to pieces in the second match. The top order need look only as far back as the South Africa series to discover good vibes of their own.
How Sri Lanka's top order handles Pakistan's spinners may perhaps go some distance towards determining the outcome of the series. The visitors are missing Mahela Jayawardene, their best batsman in slow conditions, but in Tillakaratne Dilshan and Kumar Sangakkara, they have two men who have played Ajmal with ease in the past. They are, however, the only pillars in an otherwise unpredictable batting unit. Prolific over the past two years, particularly when batting together, they may have to provide the base for the innings and ease the nerves of the young men who follow.
Pakistan's test will be to see out Malinga and Nuwan Kulasekara with the new ball. Despite an overall slip in his cricket, Malinga has recently improved his returns with the new ball, even finding appreciable outswing in the early overs. Kulasekara also found movement in the T20 series, and has wreaked havoc early on this year, albeit in patches. Pakistan's top three are far from settled, but they must discover mettle against the two new balls, or the middle-order will again be required to firefight against a consummate all-round attack.
Given Nasir Jamshed has been left out of the one-day squad and Mohammad Hafeez has been increasingly frail with the bat, 24-year-old left-hander Sharjeel Khan may be Pakistan's best bet for an opener in the first match. Sharjeel has never played an ODI, but he had approached his innings in the second T20 with a workable strategy, and made good on his plan calmly, and effectively, despite the imposing stature of the target and the clear lack of direction of more experienced men around him. The opening position has plagued Pakistan for some time, and they will hope Sharjeel can make the place his own in this series.
Ajantha Mendis had once been a feared international man of mystery, but Pakistan blew his cover in 2009, and he has only sporadically troubled international sides since then. Mendis was not in Sri Lanka's original squad for the ODIs, but Rangana Herath's withdrawal has paved his path back in. If he is picked in the XI, he will have a chance to prove he can remain effective in ODIs, even against teams from the subcontinent.
Ball by ball updates
Full Scorecard
Last Five Match Result :
(last five completed matches, most recent first)
Pakistan: LWWLL
Sri Lanka: WLWWL
Match Stats :
Since 2000, Pakistan have won 28 ODIs between the two teams, and Sri Lanka have won 26
Since July, Sangakkara and Dilshan have put up three century stands and a fifty partnership, in the six times they've come together at the crease