Why Arjun Tendulkar has a tough act to follow

Like his illustrious father, Arjun Tendulkar has also set out to seek a career in cricket. Although these are still very early days in Arjun’s career, it goes without saying that he will have to deal with the pressure of excess expectations.

Like his illustrious father, Arjun Tendulkar has also set out to seek a career in cricket. Although these are still very early days in Arjun’s career, it goes without saying that he will have to deal with the pressure of excess expectations. Even though Tendulkar himself may have appealed for the media leave his son alone and let him concentrate on his cricket, it is an almost impossible demand. The ruthless media in our country will chase him everywhere he goes and try to get in as much of Arjun as they can. In short, Tendulkar junior faces a massive test even before his cricketing journey has actually kicked off. 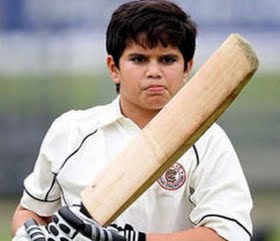 Another big challenge for him to deal with will be the pressure of comparisons. It can be said numerous times that Arjun should not be compared with his legendary dad, and that Tendulkar’s records are almost impossible to be broken. But that isn’t going to happen, at least in a cricket-mad country like India. Comparisons would always be there, and this is where Arjun will have to handle himself very carefully. The best he can do is concentrate on his individual game keeping aside all the comparisons being made with his father. It is easier said than done, but Arjun will have to find a way to do the same if he wants to excel in the sport.

International cricket and, Indian cricket in particular, are filled with instances of sons not being able to replicate the success tasted by their great fathers. The biggest example of all is that of the Gavaskars. While Sunil remains the greatest opener India has ever produced, Rohan came nowhere near to achieving anything decent in international cricket. He did play a few ODI matches, and even notched up a half-century, but was never in the frame for Test selection. In fact, after being dropped, he headed to the now defunct and then unrecognised Indian Cricket League (ICL).

Rohan is not alone. Sanjay Manjrekar also suffered owing to the burden of expectations, being the son of the great Vijay Manjrekar. Unlike Rohan, Sanjay played a fair bit of Test cricket and even compiled some famous marathon knocks, but his figures always paled in comparison to his father. Even as a standalone player, he did not perform consistently enough, and although he made a number of comebacks after being dropped, he never quite made it big.

Vinoo Mankad’s son Ashok is another illustrious example of a son who was burdened by the pressure of expectations. Although Ashok scored runs by the gallons in domestic cricket, he came nowhere close to matching the feat at the Test level. It goes without saying that Arjun will also be judged by a certain yardstick. Of course it is unfair that he be spoken of in the same vein as his legendary father. But the fact is that things aren’t going to chance. The sooner Arjun accepts the fact and learns to deal with these distractions, the better for him.