The Ranchi ODI to be played on Wednesday will be special for one man, one-day skipper MS Dhoni, as he will be playing what will perhaps be his last international match on his home ground.

The Ranchi ODI to be played on Wednesday will be special for one man, one-day skipper MS Dhoni, as he will be playing what will perhaps be his last international match on his home ground. After enduring some tough times, Dhoni returned to form in the previous one-dayer, through a well-compiled 80. Interestingly, Dhoni promoted himself up to number four in the chase, and has himself admitted that he is losing his ability to rotate the strike batting lower in the order. Perhaps, batting higher is the way forward for Dhoni, and if he can contribute in an Indian victory at his home ground, claiming the series in the process, nothing better for him.

India have won all tosses in the series so far, which means luck has also been on their side. Fortune shone on Virat Kohli as well in the previous match, as he was dropped early on in his innings, and went on to put together another exhibition of brilliant batting. Kohli will once again be the key man on Wednesday, especially if India are chasing once more. Not surprisingly, in both the games that India have won, he has been the top-scorer. And, in the one match that he fell cheaply, India ended up crumbling chasing a middling target. While Kohli's consistency in chases remains mind-boggling, India's overdependence on him is equally worrying.

Alternately, what would please India is the performance of their fringe players. Kedar Jadhav was chosen for his batting ability, but he has proved to be a surprise package with the ball, constantly claiming wickets with his off-spin. Impressively, his scalps have come with smart bowling. Of course, it will help if he gets among the runs as well. Hardik Pandya has also done well with both bat and ball, in his debut series. So that is also a big plus. Among the bowlers, Amit Mishra has grabbed his opportunities well by claiming wickets at regular intervals while yorker specialist Jasprit Bumrah has continued with his promising run. 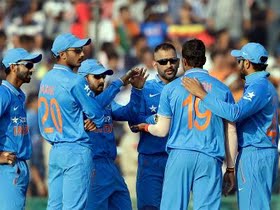 The major worry, if any for India, going into the Ranchi game, will be the form of the openers, Rohit Sharma and Ajinkya Rahane, who have failed to reach fifties in the three matches thus far. The problem, on a personal level, is bigger for Rahane, since the Mumbai bat has failed to establish himself in the one-day format thus far. Rahane has been getting starts, but has just now been converting them. Unlike in Tests, he isn't a certainty in one-dayers, and is doing his chances no good through his constant failures. Rohit is under less pressure having done well in recent times, but he would be keen to get a big score, especially in the wake of the competition for the opening slot.

For New Zealand, the lack of runs from their star performers remains the biggest concern. Martin Guptill's form and technique have stood exposed on the tour. As for Ross Taylor, his series is only getting worse. He got some runs on the board at Mohali, but then dropped Virat Kohli before the batsman could get his eye in. Kohli went to smash yet another match-winning hundred in a chase. Apart from Tom Latham and skipper Kane Williamson, no one has succeeded consistently with the bat for the Kiwis. Had it not been for Jimmy Neesham and Matt Henry, New Zealand would have folded up rather cheaply. The bowlers have tried hard, but often they haven't had enough to defend.