Ashes 2015 1st Test: On rather expected lines, the first Ashes Test being held at Cardiff is turning out to be a competitive contest.

On rather expected lines, the first Ashes Test being held at Cardiff is turning out to be a competitive contest. Both Australia and England are fighting it out hard, as a result of which a close finish could be on the cards. But, after two days, there is no doubt as to which side has the ascendancy. England had the clear edge as of now, having claimed half of Australia's first- innings wickets. It was a wonderful bowling performance in which they never let Australia completely get away. Everytime a partnership was building, the hosts managed to strike back, and inch ahead in the Test. 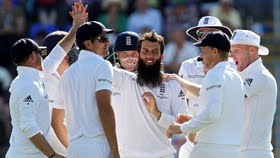 Without doubt, Moeen Ali was the hero for England on the second day. In the preview to the Test, England must have been pondering upon playing one among Adil Rashid and Ali. They decided to keep the faith in Ali and have been rewarded handsomely for the same. Ali doesn't look like a star performer, who could score big hundreds, or run through opponents with his spin. But, he has been doing a decent job for England with both bat and ball, which is why England have been retaining him. Even though many do not consider Ali a regular spin bowler, he has been proving his critics wrong time and again. Thursday was another reaffirmation of the same.

Both with bat and ball, Ali made key contributions in the first innings at Cardiff. He began the day with the tail for company as England looked to extend their score. Batting with the bowlers can often be tricky, but Ali adopted an uncomplicated approach and batted with freedom, knowing it was his responsibility to get a majority of the runs. His innings was crucial in the sense that, had he been dismissed early, Australia could have kept England to well under 400. But, what Ali's aggressive did was it unsettled the Aussie bowlers' plans, and allowed England to finish with a competitive total. It also gave England the confidence as they came on to bowl.

Coming to Ali's bowling, he again impressed. There was no doubt the Australians were going to attack him, but they clearly underestimated Ali's prowess as a spin bowler. The fact that Australia's two best players of spin -- Steven Smith and skipper Michael Clarke -- fell to Ali was a clear indication of the same. And, it wasn't just that the duo fell playing rash strokes. Both were fixed by Ali's guilt, going doing the pitch, and finding themselves in no man's land. It was an excellent exhibition on spin bowling, and by far the best on showed by bowlers across the course of the two days.

This is not the first time Ali has stood out with his bowling. Against India as well, he turned out to be a match-winning bowler. The Indians, like Australia, believed he would not be such a big threat, but it clearly turned out to be the opposite. In fact, Ali ran through the Indian innings in one Test and kept striking every time the captain brought him on during the series after that. Considering the manner in which Ali has constantly been claiming wickets at the Test level, that too by outsmarting excellent players of slow bowling like Smith and Clarke, teams must take Ali lightly at their own peril.