The day began with Younis Khan announcing his shock retirement from ODIs, just days after he was recalled for the one-day series against England. The next task for Pakistan was undoubtedly to announce that they would like the win the first ODI at Abu Dhabi for him.

The day began with Younis Khan announcing his shock retirement from ODIs, just days after he was recalled for the one-day series against England. The next task for Pakistan was undoubtedly to announce that they would like the win the first ODI at Abu Dhabi for him. There was the 'now in vogue' guard of honour from teammates, the bat waves from the crowd and the raising of willow from the man who finished with 265 ODI appearances. It wasn't a memorable last innings from Younis. He struggled his way to 9 before an ungainly pull ended his ODI career.

Mohammad Hafeez, it was, who ensured Younis got the winning farewell he deserved, something many other greats from the game would have craved for, but did not get. Hafeez, who was a key figure in Pakistan's Test win against England earlier, carried on his good form into the one-dayers as well. He eased his way to his 11th one-day hundred as Pakistan romped home with more than six overs to spare. Hafeez timed the ball to near perfection during his stay at the crease, and England's desperation to see the back of him was evident in an unwanted lbw review when a Chris Woakes delivery had clearly hit the bat. 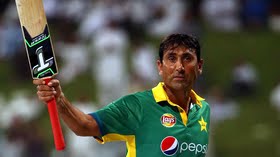 While 217 was not a big chase for Pakistan, they were in serious trouble early on, as Reece Topley ran through the top order even as Hafeez watched the carnage from one end. The first one to fall was skipper Azhar Ali, trapped lbw as the bowler began in-swinging the ball dangerously. Bilal Asif was sent in as a pinch hitter, a ploy that became redundant in one-day cricket ages ago. Not surprisingly, the move failed as Asif too was lbw. Pakistan were hobbling at 41 for 3 when Younis exited the scene. Hafeez eventually found good support in Babar Azam. He made an assured unbeaten 62 as Pakistan eased to victory by six wickets.

Earlier, England recovered from a horror start to find themselves reasonably placed at 147 for 3. But another batting collapse in the second half of the innings, and this one lasted longer, resulted in England failing to end with a competitive total. James Taylor and Eoin Morgan batted with poise to pull England back. Skipper Morgan, who had been hit on the head by Mitchell Starc earlier in the season, wore additional protective gear on his helmet, and looked in control during his 76 from 96 balls. He eventually fell edging Shoaib Malik behind the stumps, unable to control the slight turn that Malik achieved.

Malik was also responsible for the other set batsman to fall. Taylor made a fighting 60 before chipping Malik to midwicket. Before that, he was also responsible for the run out of the struggling Jos Buttler. Taylor pushed towards midwicket, and took off for a non-existent single. The second batting collapse for England was well and truly underway. At the start of the day, they lost three for 14 in under 4 overs. Mohammad Irfan got through Jason Ray's defense, and shattered his stumps. Joe Root claimed a duck as he was trapped in front by Anwar Ali. Alex Hales edged the same bowler to Younis at slip. It was a big indication that this wasn't going to be England's day. And, it wasn't.