Namibia caused a massive upset in the first match of the ICC Men’s T20 World Cup 2022, defeating Sri Lanka by 55 runs at the Simonds Stadium in Geelong on Sunday (October 16). Sent into bat first after losing the toss, Namibia recovered from 93 for 6 to post a decent 163 for 7.

Jan Frylinck top-scored with 44 off 28 balls, hitting four fours, while JJ Smit contributed an unbeaten 31 off 16. The latter struck two fours and an equal number of sixes. The duo added 70 runs for the seventh wicket before Frylinck was run out off the last ball of the innings. Pramod Madushan claimed 2 for 37 for Sri Lanka, while spinners Maheesh Theekshana and Wanindu Hasaranga picked up one wicket each while being economical.

In the chase, the Lankans collapsed to 108 all out in 19 overs. Skipper Dasun Shanaka top-scored with 29, while Bhanuka Rajapaksa contributed 20 off 21, but all the others failed to make any sort of impact. Sri Lanka were off to a horror start, losing 3 for 21, and could never recover from that position. Kusal Mendis (6), Pathum Nissanka (9), Dhananjaya de Silva (12) and Danushka Gunathilaka (0) all fell cheaply. 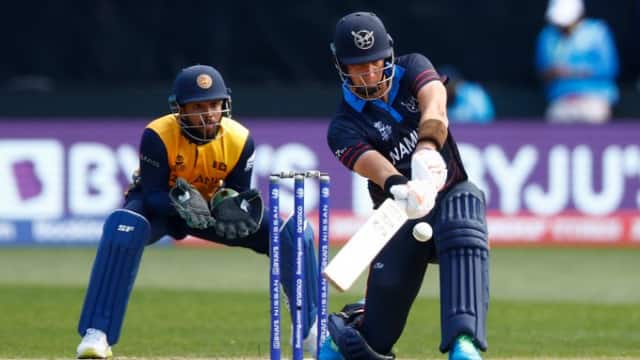 For Namibia, Frylinck starred with the ball as well, picking up 2 for 26. David Wiese (2 for 16), Bernard Scholtz (2 for 18), Ben Shikongo (2 for 22) and Smit (1 for 16) all came up with significant contributions. Sri Lanka kept losing one wicket after the other and never looked in the contest during the chase.

Speaking after the famous win, Namibia skipper Gerhard Erasmus said, “Incredible journey, last year was a special experience for us. We've started a great win, but lot of work to do throughout this tournament still. It's been a historic day for us. The opening day has been quite special but we want to kick on from here and qualify for the Super 12 stage.

Reflecting on the loss, Sri Lankan captain Dasun Shanaka said, “The surface played really well, but we didn't execute well with the ball. Didn't bowl in the right areas and that's a concern. Once we lose three wickets in the powerplay, we are usually out of the game. The plans should be simple, we need not do anything special. We’ve got a good team, it's about the process.”