Stuart Broad controversy: Umpire and not the player to be blamed

The controversy over Stuart Broad not ‘walking’ in spite of the fact that he clearly edged an Ashton Agar delivering during the first Ashes Test at Trent Bridge, Nottingham has only reignited the age old debate in the game...

The controversy over Stuart Broad not ‘walking’ in spite of the fact that he clearly edged an Ashton Agar delivering during the first Ashes Test at Trent Bridge, Nottingham has only reignited the age old debate in the game – should batsman walk or not walk? Time and again this question has been asked and we are yet to get a proper answer. Probably as long as the game is played, the query will remain unanswered since walking is an individual choice. It is not a rule that can be applied.

So, is Stuart Broad to be blamed for not walking? No, not at all. He had every right to stand his ground in spite of the fact that everyone present out in the middle except Aleem Dar knew that Broad had definitely edged the ball. Although Dar has become a highly acclaimed umpire over the years, it has to be said that this was a howler. One only wishes he is given a chance to explain why he chose to give the batsman not out. For sure, he must have his reasons, and him being such a reputed official, cricket fans and players have the right to know what made him give that controversial decision. 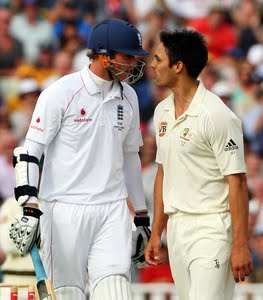 Dar and the other umpires have all the technology in the world to make the decision, and if they cannot get such basic decisions right, it points to the fact that there is something amiss with the technology itself. Mind you, Dar did not use it since he felt Broad hadn’t nicked the ball at all when, in reality, he had actually thick-edged it to the first slip. As for Australia, they were unlucky since Michael Clarke had already used up the reviews at hand, and had nothing left. Again, it isn’t possible to give unlimited number of reviews to teams since captains would then review every dam decision, killing the game. Then again, there is a third umpire who could have stepped in and stopped the farce.

Australia, on the other hand, shouldn’t be overly peeved. Yes, they got an extremely unbelievable decision, but you can bet that if there was an Aussie in place of Broad, he would have stood his ground as well. The Australians, barring a person named Adam Gilchrist, never walked. There have been numerous occasions when Australian batsmen have gone on to make massive scores after being given reprieves by the umpire. Not surprising then that Michael Clarke did not indulge in any Broad-bashing.

The issue over here is not about sportsmanship. It is about an intense cricket match, where both teams want to win at any cost. Gone are the days when captains would call back batsmen when they knew they were not out. Skippers today are also well aware of whether a batsman is out or not. But, would Clarke have called back Broad had he not nicked the ball, and had been given out by Dar? No way. No captain in the world would do that today. Players must thus learn to take the good decisions with the bad ones. Of course, they can only pray that they aren’t fielding when a ‘Dar’ing decision like the one is question is given!