Pace bowler Mark Wood has made a comeback to the England squad for the Champions Trophy in June, and he says he wants to become one of the best bowlers in the world

Pace bowler Mark Wood has made a comeback to the England squad for the Champions Trophy in June, and he says he wants to become one of the best bowlers in the world.

The 27-year-old has struggled with injuries. On his recall, he told The Guardian, “I have had a taste of international cricket and loved it – you can’t believe how good it is. It’s like a drug and you just want more and more of it. I don’t think yet I have shown how good I can be, that’s been the frustrating side of it. 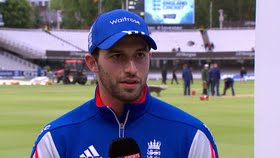 “When you start out playing for England you take so much in, like the intensity of the crowd, and you can perhaps push yourself too hard. I think I can appreciate it more now, coming out of injury, and I believe I can offer something different, be one of the best in the country and then go on to become one of the best in the world,” he further told The Guardian.

On his comeback goals, he said, “It’s hard not to think about the Ashes this winter. The professional answer is to concentrate on the next game and all that but when you hear the stories from guys who have been on that tour it sounds unbelievable. That’s what I’m after.

“Test cricket is my ultimate [goal]. It might not be the most financially rewarding with all the T20 tournaments around but that is the mark of a true international fast bowler. That’s what I want to do, I want to be recognised as one of the best in the world.”