The third ODI between England and Pakistan at Nottingham on Tuesday saw many records tumble, and a few being threatened to be broken. Here's a look at some.

During the course of their 444 for 3, England broke the record for the highest total in one-dayers. The previous best was by 443 for 9 by Sri Lanka against Netherlands in Amstelveen in 2006.

Alex Hales, who was the star of the show with 171, broke the record for the highest individual score by an England batsman in ODIs. The previous best was by 167 not out by Robin Smith versus Australia at Edgbaston in 1993.

During the course of his whirlwind half-century, Jos Buttler broke the record for the fastest fifty in ODIs, getting there in 22 balls. The earlier record was in the name of Paul Collingwood, who got to 50 from 24 balls against New Zealand at Napier in 2007-08. Incidentally, Eoin Morgan registered a 24-ball fifty on Tuesday.

Hales and Joe Root added 248 runs for the second wicket. This is the highest for any wicket against Pakistan beating the 238 added by Hashim Amla and AB de Villiers in 2012-13. This is now also England's third highest partnership for any wicket in ODIs.

When he crossed fifty in the match, Root became the sixth England batsman to register five consecutive ODI half-centuries. The others in the list are Graham Gooch, Geoff Boycott, Alec Stewart, Jonathan Trott and Alex Hales.

Wahab Riaz conceded 110 runs in his 10 overs. These are the second worst returns in terms of runs given, behind only Mick Lewis, who was thrashed for 113 in that batting feast at Wanderers back in 2006.

Mohammad Amir's 58 makes him the first number 11 in one-dayers to have crossed the fifty mark. The previous best was also by a Pakistani -- 43 by Shoaib Akhtar, against England in Cape Town, during the 2003 World Cup.

This was the first time England recorded more than more partnership of over 150. Overall, this has happened only seven times in ODIs. 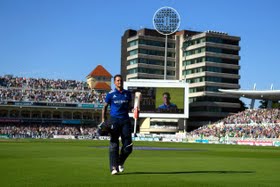 Pakistan haven't won a bilateral ODI series in England since 1974. In fact, the 1974 win came on their maiden tour, and it is Pakistan's only win to date in the country in ODIs.