A fighting stand of 124 between Ian Bell and Jonny Bairstow rescued England in the Lord’s Test. By the close of play on Day 2, England are decently placed at 208 for 5 in 72 overs in reply to the visitors’ total of 309. Jonny Bairstow is still batting with a career best knock of 72*.

Update at Stumps on Day 3: A fighting stand of 124 between Ian Bell and Jonny Bairstow rescued England in the Lord’s Test. By the close of play on Day 2, England are decently placed at 208 for 5 in 72 overs in reply to the visitors’ total of 309. Jonny Bairstow is still batting with a career best knock of 72*.

The final session saw Bell and Bairstow occupy the crease and defy the South African pace attack. Both the batsmen worked hard to bring up their respective fifties. South Africa had to wait for about 38 overs to dislodge this partnership. Vernon Philander bowled a great over which eventually saw Ian Bell (58 from 157 balls with 7 fours) lured into a false drive to a full length away swinger to edge him into the slips. 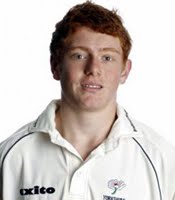 After Bell’s exit, Wicket Keeper Matt Prior (22* from 31 balls) joined Bairstow to bat through the rest of the final session safely. Bairstow, who did well to survive against a barrage of short pitch deliveries finished the day with 72* from 137 balls with 9 fours.

Update at Tea on Day 2: South Africa are on top after reducing the hosts to 94 for 4 in 38 overs by Tea. It was a great afternoon session for the Proteas as they took three wickets while conceding a mere 65 runs.

The first wicket to fall in the post lunch session was that of Jonathan Trott (8), who was lbw to a Dale Steyn delivery which had straightened to hit his pad infront of leg in the 14th over. Steyn had got the lbw decision through a review. Within no time, Alastair Cook (7) departed playing a loose drive away from his body off Steyn to edge it into the slips. A while later, the tiny James Taylor (10) forced to dab a lifter from Morne Morkel to second slip.

England got through a 40-run unbroken stand between Ian Bell (20*) and Jonny Bairstow (19*) which ensured that there was no further damage.

Update at Lunch on Day 2: England lost the wicket of Skipper Andrew Strauss just at the stroke of lunch on Day 2 to finish the morning session at 29 for 1 in reply to South Africa’s 309. Morne Morkel got through the defenses of Andrew Strauss (20) with a delivery that nipped back in the 11th over.

Earlier, England without much fuss wrapped up the South African innings this morning by taking the remaining three wickets in a little under 14 overs while conceding 47 runs. Stuart Broad produced the first breakthrough with Dale Steyn (26) edging a drive off him to the slips.

After Steyn’s exit, Morne Morkel came up with a useful 25 before he edged his cut shot off Steven Finn and was brilliantly caught one handed by a diving Matt Prior. Vernon Philander (61 from 158 balls with 6 fours), who registered a maiden Test fifty was the last man to be dismissed when he got stumped out after leaving the crease to slog Graeme Swann.