Sri Lanka seemed to be completely out of contest at 102 for 5 as early as in the 16th over chasing a target of 295. However, a 102-run partnership between Lahiru Thirimanne (77 from 96 balls with 5 fours and 3 sixes) and Jeevan Mendis (72 from 88 balls with 6 fours) brought them back into the contest. India was given a huge scare as Sri Lanka put up a stunning fightback but only to go down by 20 runs in the end. 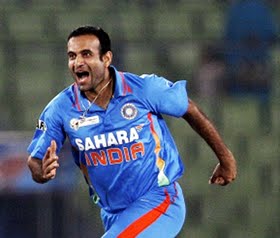 Irfan Pathan held his nerve for India capturing five crucial wickets to take the visitors to a nervous victory. Pathan had also contributed with the bat scoring an unbeaten 29 (from 28 balls) to put up an important stand of 77 runs with MS Dhoni. The Baroda all-rounder was named as the Man of the Match while Virat Kohli got the Man of the Series award.

India recovered brilliantly from two tricky situations – first from 87 for 3 and then from 213 for 6 to post an imposing total of 294 for 7 in the fifth and final ODI at Pallekele. An injured Indian Skipper MS Dhoni played a blistering knock of 58 from 38 balls (with 8x4s and a six) to leave the Sri Lankans with a big target to chase. Earlier, it was the combination of Gautam Gambhir (88 from 99 balls with 7x4s) and Manoj Tiwary (65 from 68 balls with 6x4s) providing a sound launching pad for India with their respective half centuries in a 110-run partnership for the 4th wicket.

For the Lankans, Lasith Malinga had a mixed bag taking 3 for 64 which included the big wickets of Manoj Tiwary and Suresh Raina in consecutive deliveries. Malinga also recorded his 200th wicket in ODIs when he dismissed MS Dhoni with a bouncer.

Toss and Teams: India has won the toss and opted to bat first in the fifth and final ODI at Pallekele. The big news is that Sri Lanka have rested their Skipper Mahela Jayawardene! Angelo Mathews will be leading the hosts. India have given a break to Virender Sehwag and drafted in Ajinkya Rahane.

The Lankans have made two changes with Chamara Kapugedera and Sachithra Senanayake coming in for Mahela Jayawardene and Rangana Herath.

The pitch for this final ODI has a darker look to it which means that there is some moisture underneath the surface. Once that eases out with the help of the sun, it will become a batting track. Under the lights, it is believed that batting is going to be extremely tough at this venue with the new ball darting both the ways.