Past failures against Australia played on Pakistan’s mind

The three-match ODI series between Australia and Pakistan at searing hot Sharjah was a hard fought one, with both sides putting up credible performances.

The three-match ODI series between Australia and Pakistan at searing hot Sharjah was a hard fought one, with both sides putting up credible performances. There was nothing to choose between the two teams per se, in terms of talent and even performance wise. In the end, however, Australia won since they were the mentally tougher of the two teams. Pakistan, time and again during the series, put Australia under immense pressure, but except for the 2nd ODI, failed to drive the advantage home. Possibly, the history of never having beaten the Aussies for nearly a decade was weighing heavily on their mind. What else could explain their crumbling after being in a seemingly unassailable position? 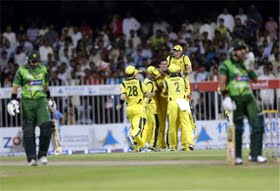 In the do or die third encounter on Monday, Pakistan got off to the best possible start they could. Batting first, openers Mohammad Hafeez and Nasir Jamshed combined in a 100-plus partnership to set a solid foundation for the team. From that point, they should have easily crossed 280. However, some disciplined bowling by Australia in conjunction with some equally poor stroke play by Pakistan’s batsmen changed the equation. In Asad Shafiq, Shahid Afridi, Misbah-ul-Haq and Umar Akmal, they had the names who could do the job for them, but the scoreboard told a different story. For the second time in the series, Pakistan’s batting faltered and, in hindsight, it cost them the series.

It could be argued that the bowlers could have done a better job, especially after once restricting Australia to 159 for 5. However, skipper Misbah did not help matters for Pakistan by taking off his lead spinner Saeed Ajmal at a time when another wicket from him could have titled the scales in Pakistan’s failures. These little decisions might seem negligible when the overall game is considered, but when put into context, it is realised that they have a significant impact on the final outcome.

Consider this. Had Glenn Maxwell, who made a nerveless, unbeaten half-century to guide Australia home, fallen early to Ajmal, the likes of Daniel Christian and Mitchell Johnson would have had to confront Ajmal. Although both are potent with the bat, neither has been in great form with the willow, and a rampant Ajmal would have fancied his chances against the duo and the tail. In the end, Ajmal ended up bowling only nine overs, which proved that Misbah had got his act wrong. Also, earlier in the innings, he failed to refer a close lbw shout against Michael Hussey. Replaying suggested that the left-hander was caught in front of the stumps. Following the reprieve, Hussey went on to play a knock that changed the complexion of the game.

Pakistan would be glad in a sense that, for a change, they competed against Australia. At the same time, they must be aware deep inside that, given the conditions, this was their best chance to upset Australia. Opportunity lost, surely.