pitch report : Virat Kohli said there was more grass on the Ahmedabad surface than usual, but this may just mean the pitch holds together better, and another high-scorer is on the cards. The weather, in any case, is unlikely to interfere. 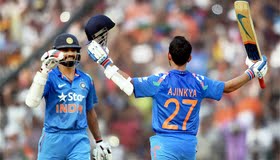 Preview :Pushed to the fringes of the ODI team because of poor form, Ishant Sharma made some return to the format on Sunday, claiming 4 for 34 in his first ODI since January. There was gentle seam for Ishant, but his real strength was the shorter length he lived on, surprising Sri Lanka's batsmen by achieving a little extra bounce. It was the kind of bowling that selectors will want to see ahead of the World Cup, and a few more outings like that one might help Ishant muscle his way back into a first choice XI even when the regular frontline bowlers are fit.Mathews made particular mention of the lack of intent in the first ten overs of Sri Lanka's innings, and no one was more guilty of dawdling than Upul Tharanga, whose 28 off 53 clotted up an end, as Sri Lanka pursued 364. Few cricketers polarise fans as much as Tharanga, but now handed a well-earned ODI recall, he will need an impressive score quickly, if he is to keep Kusal Perera out of the opening spot.

Dropped catches, flat bowling, batsmen thrashing at balls and barely connecting: Sri Lanka's cobwebs stymied them on Sunday, but the time to bust open the broom cupboard and clean their cricket up is looming. Fans have largely been content to grant the team a little grace for the first loss, given the side's lack of preparation, but they will soon expect significant improvement, even if a series victory is some distance off. India are, after all, now Sri Lanka's most rivalrous opposition, even if that sentiment is not reciprocated from across the Palk Strait.Angelo Mathews took aim at the batsmen after the first game, and with an inexperienced attack in tow, the top six will seemingly have to carry Sri Lanka if they are to make something of this series.

Only Mahela Jayawardene looked in touch, but it often does not take Tillakaratne Dilshan much time to shake off poor form, and in those two lie Sri Lanka's best hopes until Kumar Sangakkara and Angelo Mathews work themselves into better nick.   India's batsmen, meanwhile, were sending Sri Lanka's bowling around the ground like a street vendor would swipe away flies. Short balls were flat-batted down the ground, full ones carved square, and tight, good length deliveries crashed to the fence like everything else. All this was overseen by Virat Kohli's dynamic leadership. After the match it emerged that it had been his idea to take the Powerplay in the 24th over, and it was in that five-over period that India sprinted away with the match. Having tormented Sri Lanka with the bat in the past, he has now begun doing it from the dressing room.The visitors are depleted of course, but now the hosts have even more of their frontline personnel absent.

Varun Aaron hit the highest speeds in the first ODI, but he is out for two weeks, while Mohammad Shami - India's best bowler against West Indies - had already been ruled out with injury. Bhuvneshwar Kumar is also being rested. That India managed a mammoth score in the first ODI without Rohit Sharma and MS Dhoni suggests substantial batting depth, and as the bowling had clicked in the last match as well, Sri Lanka will have to raise their game significantly to challenge them.

Match Stats : No side has made more 300-plus first-innings scores against another, than India's 13 such totals against Sri Lanka. Including Sunday's victory, India have won 12 of these encounters.

Kohli has played in 22 victories against Sri Lanka - more matches than he has even played against any other country. He averages 70.21 in those victories, with five hundreds and five fifties.

Sri Lanka have won 12 ODIs and lost only three away from home, this year.