Australia fast bowler Megan Schutt seems to be playing mind games with India ahead of the crucial Women’s T20 World Cup. Australia got the better of South Africa in the rain-hit second

Australia fast bowler Megan Schutt seems to be playing mind games with India ahead of the crucial Women’s T20 World Cup. Australia got the better of South Africa in the rain-hit second semi-final, by 5 runs (DLS method). Earlier, India gained direct entry into the final following the washout against England having topped the group.

Schutt starred with the ball in the semi-finals against South Africa with figures of 2 for 17. However, in the run-up to the big final, Schutt has claimed that she is no match to Indian openers Shafali Verma and Smriti Mandhana, who took her apart in the tournament opener.

The Aussie pacer was hit for four boundaries in the opening over by Shafali Verma. “I just hate playing India - they’ve got the wood over me. Smriti and Shefali have got me covered. That six Shafali hit me for in the tri-series was probably the biggest one I’ve ever been hit for,” Schutt was quoted as saying by the official ICC website. “ 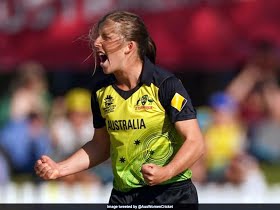 The bowler added that while she will try her best to stifle the Indian opener, she is not confident of matching up to the talented Indian duo. “There are obviously some plans we’re going to revisit as bowlers. Clearly, I’m not the best match-up to those two in the Powerplay. They find me quite easy to play,” she candidly admitted.

On the final, Schutt said the summit match against an in-form India will be a massive challenge. “We’re at that final we’ve been talking about for so long and against India, which is super fitting considering the tri-series we had. It couldn’t really be a bigger challenge for us,” she said.

“It’s not really a bad thing, it’s good we’re going up against a team we’ve played a lot recently and it’s the same for them as well,” she further stated,

India gained an entry into the final after their semi-final against England was washed out without a ball being bowled due to persistent rain. The other semi-final between South Africa and Australia was also affected due to rain, but the shortened game managed to finish as the Aussies won by five runs.

Speaking to reporters at the post-match press conference, after South Africa’s loss to Australia, South Africa captain Dane van Niekerk said that she preferred to lose than reach the final without playing out the match. “I have to give credit to the ground staff; they did absolutely everything to keep us in the park. And we are here to play cricket. I’d rather lose than get a free pass into the World Cup final,” she said.

The final will be played on Sunday at the Melbourne Cricket Ground, which also happens to be International Women’s Day.