A dream come true for me: Kuldeep Yadav

Left-arm wrist spinner Kuldeep Yadav, who claimed four wickets on debut for India against Australia at Dharamsala, admitted it was a dream come true for him.

India bowled out Australia for 300 on the first day of the fourth and final Test match. The chinaman bowler finished with figures of 4/68. His wickets included David Warner, Peter Handscomb and Glenn Maxwell.

"I am very happy. It is a dream come true for me. In a Test match you can't ask for more than this," the 22-year-old was quoted as saying in IANS after the day's play.

Kuldeep admitted he was nervous at the start of the Test, but crew in confidence after he started to bowl. "Initially I was nervous when I was standing at fine leg in the first over. But then it felt normal for me. I have improved my fitness levels, which helped me with my bowling." 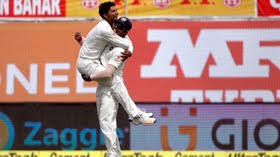 On the nature of the wicket at Dharamsala, he further added, "The wicket was good to bat on, the ball was not turning much. There was a little bit of help for the spinners. I bowled just wicket to wicket and variations."

Speaking about how he got his wickets, Kuldeep explained, "Obviously I worked a lot on my variations be it the wrong one, flipper and the normal chinaman. For Handscomb I set up the plan. I showed him the wrong one first, and then bowled him with the chinaman.”