There is always too much noise over spinning tracks: Virat Kohli

Indian captain Virat Kohli stuck to his stance of defending the pitch used for the day-night Test. The pink-ball Test between India and England ended in under two days, with India winning by 10 wickets. In the following days, there has been numerous criticism about the pitch. While the Indian team has stuck to its guns, a number of former cricketers, particularly from England, have been critical of the surface.

Speaking at a virtual press conference ahead of the fourth Test, Kohli pointed out that there is never any criticism over seaming surfaces but always a lot around spinning tracks. "I totally believe that there is always too much noise over spinning tracks. I am sure if our media is in a space to contradict those views or present views which say that it is unfair to criticism only spinning tracks, then I think it will be a balanced conversation. 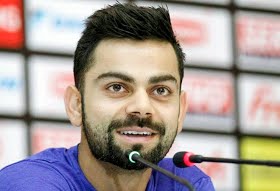 “But the unfortunate bit is that everyone sort of plays along with that narrative and keeps making it news till the time it's irrelevant and then a Test match happens - then on days 4 and 5 no one says anything. But if the match finishes in 2 days, then everyone makes it a big issue.. It just becomes an issue to talk about," the Indian captain added.

“The reason for our success is we haven’t cribbed about any of the pitches we have played on and we would continue to play like that as a team moving forward as well. It has always been the case - spinning tracks come into focus way more and when the ball seams on a particular pitch and teams get bundled out for 40, 50 or 60.. no one writes about the pitch. It's always about bad batting. We all need to be very honest with ourselves - what space are we talking from and what's the idea behind continuing this narrative and what purpose it serves people to continue this conversation which is so one-sided,” the Indian captain went on to add.

The fourth and final Test between India and England will kick off in Ahmedabad on Thursday, March 4.