Mumbai Indians definitely had the upper hand as they faced last-placed and eternally struggling Kings XI Punjab at their adopted home ground Vizag. However, Punjab managed to overcome the Mumbai challenge thanks to an excellent bowling performance on a challenging surface for the team batting first. The Mumbai batsmen really failed to read the conditions well, and kept losing wickets as regular intervals, thus never getting into any sort of rhythm. Punjab's bowlers, on the other hand, exploited the conditions well, and were rewarded suitably. 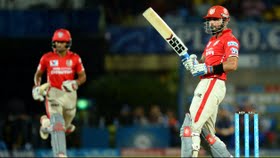 Clearly, it was Punjab's bowling effort on the day that made the difference. All their bowlers chipped in, and most of them were among the wickets. Marcus Stoinis finished with superb figures of 4 for 15. He stalled the big Mumbai middle order, which needed to fire once the top order perished early. Significatingly, Stoinis' victims were big ones. Three of them were big wickets -- the hard-hitting Jos Buttler, Kieron Pollard and Krunal Pandya. Pollard and Pandya had got starts, and were about to open up when they perished, so the dismissals were massive ones.

While Stoinis was the star of the show with the ball, there were others also who played significant roles. Axar Patel cleaned up Mumbai Indians skipper Rohit Sharma while Sandeep Sharma finished with excellent figures of 2 for 11. His wickets included those of Ambati Rayudu while Mohit Sharma also finished with two scalps, sending back Unmukt Chand early in the piece. Almost all the bowlers played a role in keeping Mumbai down to a gettable total. KC Cariappa was the only one who went wicketkess.

Mumbai Indians' batting was exposed under tough conditions. Skipper Rohit struggled to time the ball at all, before eventually perishing. Chand and Rayudu both fell for ducks, which was a big setback for the so-called hosts. Buttler fell cheaply, which put the team in further trouble. Pollard got his eye in, but fell just as he should have carried on. Pandya also got a start before falling. They never got into any sort of rhythm at all with the bat.

Once Punjab had restricted Mumbai to a low total, all they needed was to bat sensibly to get home. And they did the same, as Murali Vijay and Wriddhiman Saha eased into half centuries to take Punjab home. Hashim Amla and Glenn Maxwell went back without scoring, but that did not damage their chase too much. Mumbai's bowlers did not make much of an impression, as Punjab registered a consolation win.