A smooth One Day International (ODI) hundred by opener Ian Bell spurred England to an easy 114 run victory over an out of sorts West Indies at The Rose Bowl in Southampton.

A smooth One Day International (ODI) hundred by opener Ian Bell spurred England to an easy 114 run victory over an out of sorts West Indies at The Rose Bowl in Southampton. Bell, standing in for the retired Kevin Pietersen showed that his all-round stroke making could be as valuable as the more muscular method of man he replaced. After captain Alastair Cook fell to Ravi Rampaul in the first over, Jonathan Trott joined Bell and together they added 108 before Trott was caught behind off Narine for a well-made 42, and with England then 108/2 off just 20.3 overs, they must have envisaged a score of over 300 rather than the 288 they reached in the end. 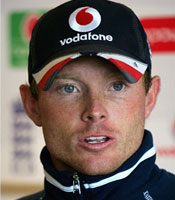 The West Indies started their reply brightly too. Fans who had waited over a year to see Chris Gayle in West Indies colours once again found they would have to wait at least a few more days as a foot injury ruled him out of today’s game. Yet his replacement, Dwayne Smith, ensured the visitors had a sparkling start by striking a rambunctious 56 off 44 balls to give themearly hope.But littlecame after his inningsas England put up a blameless bowling and fielding performance to dismiss West Indies for a measly 172.

West Indies chose to field upon winning the toss and Bell looked in good touch from the start. Possessing all the shots, he displayed almost his full array in Russell’s third over, striking him for three fours and a six, all in different areas of the park. He required only 117 balls for his eventual 126, yet there was never any hint of violence, and he relied instead on the silken touch for which his game is known.

He probably should have been out when 23, for the close-in fielders were very convinced that he had feathered a catch through to the keeper. But the umpire was unmoved and Hot Spot showed nothing. Yet if he did have a reprieve (Snicko seems to indicate that he did) he was unperturbed, and continued along his merry way until the 40th over when he top-edged a slower ball from Bravo and was caught by DeneshRamdin.

Trott batted solidly, hitting three boundaries before Narine, more steady than threatening, had him caught behind in the 21st over. Marlon Samuel’s uncomplicated off-spin accounted for Ravi Bopara for eight and Eoin Morgan for 21, before Tim Bresnan was run out for a run-a-ball 21. At the end of 50 overs wicket keeper Craig Keiswetter, on 38 made from 39 deliveries was unbeaten, with his partner Stuart Broad on 22.

Apart from the batting of Smith there was little to recommendthe West Indies’ innings. Always partial to the leg-side,the Barbadian showed that his all-round game had improved with some breathtaking offside strokes, including his first boundary, a well-timed drive through cover standing tall on his back foot. He took Steven Finn for 14 runs in the innings’ sixth over and must have given the hosts a scare.

His opening partner Lendl Simmons briefly flourished, striking Jimmy Anderson for two boundaries before playing-on in the same over. Ramdin was surprisingly sent in at three in place of the injured Darren Bravo. He was never fluent, consuming 52 balls for his 22 before he was LBW in a Bresnan trademark dismissal from a delivery snaking in to him from off.

Samuels was in at four and it was evident from the first two deliveries he faced that his good form from the test series had not deserted him. He got two from an effortless drive that ran close to the square boundary, while he expertly swayed out of the way of the vicious short ball that Bresnan served up next.

Dwayne Bravo was only eight when Finn had him LBW, while Pollard, eyeing the drizzle and aware that they were behind in the Duckworth/Lewis computations, swung hard at Broad and was brilliantly caught by Morgan at point for three. Minutes later the rain became heavier, prompting the umpires to suspend play.

The delay lasted an hour and upon resumption the target was moved to 287 from 48 overs. Samuels was visibly more aggressive in view of the slightly more difficult task and he perished on 30 when his flick off Anderson did not gain enough elevation to evade Swann, who took the catch over his head at midwicket. Thereafter the West Indies’ innings fizzled, lasting less than nine more overs. Bresnan was his side’s best bowler with figures of four for 34 off 7.4 overs.

The West Indies would have been disappointed in this performance. The absence of Chris Gayle might have dampened their high expectations, but whether or not he plays at The Oval they will need to improve considerably if they are to achieve their stated goal of winning the series. They were less suited than their opponents to the windy and chilly conditions that they had to face but their long suffering fans will not accept excuses for such an ineffectual performance. A much-improved display will be expected on Tuesday.