England exacted revenge for their 2015 World Cup loss with a massive 106-run triumph over Bangladesh at Cardiff on Saturday.

Jason Roy was the star of the show for England with a cracking 153 from 121 balls as the hosts registered their highest World Cup score of 386 for 6. England, however, has a big cause for concern as Jos Buttler picked up a hip injury during his half-century in the game.

In reply, Shakib Al Hasan hit a belligerent hundred. However, Bangladesh never posed any challenge to England's massive total as Jofra Archer killed the chase with 3 for 29, ramping up his pace quite a bit. The match was, however, the story of Jason Roy's redemption, who had a poor game against Pakistan. 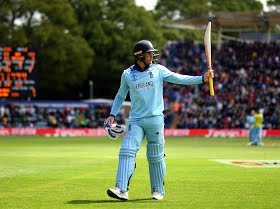 “We knew we needed to improve in order to win against Bangladesh and we were outstanding with the bat. The two boys at the top laid a solid platform as Jason managed to get a significant score. It’s great to see,” said Eoin Morgan, the England captain, after the win.

Further praising Roy, Morgan said, “He’s very intimidating to play against. If you look at the guy, he has matured from a county cricketer to a full-blown international cricketer, particularly with the temperament he shows at different stages of his innings and how he goes about picking off his boundaries. The rate he gets his runs at is so difficult to defend. He scores all around the ground, he takes good bowlers down and hits good balls for boundaries.

Apart from Roy, Buttler blasted 64 from 44 balls but pulled a muscle after hitting a six. “He didn’t keep as a precautionary measure. He’ll be monitored in the next 48 hours,” added Morgan.

England next faces West Indies at the Hampshire Bowl on Friday.