In yet another unexpected result in the T20 World Cup 2022, New Zealand got the better of Australia by 89 runs in the first Super 12 match of the ICC event at the Sydney Cricket Ground (SCG) on Saturday, October 22. This was New Zealand’s first win over Australia in Australia in over a decade.

Batting first after losing the toss, the Kiwis put an impressive 200 for 3 on the board in their allotted 20 overs. Devon Conway led the way with an unbeaten 92 off 58 balls. He hit seven fours and two sixes in his wonderful.

Conway was the silent partner in the scintillating opening stand of 56 with Finn Allen in 4.1 overs. The latter took on the Aussies from the word go and hammered 42 in only 16 balls. Allen’s knock featured five fours and as many as three sixes before he was bowled by Josh Hazlewood. 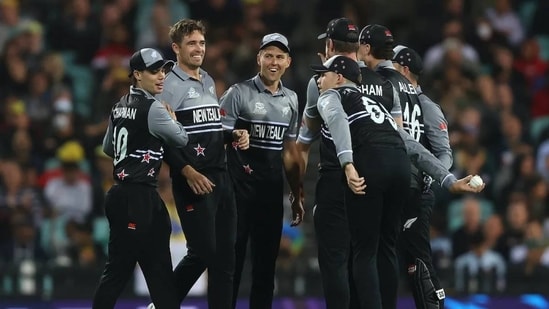 New Zealand skipper Kane Williamson struggled for fluency and managed only a run-a-ball 23. He was dismissed by Adam Zampa, trapped leg before as he looked to play the reverse-sweep. After Glenn Phillips (12) perished cheaply, James Neesham provided the finishes touches to the innings. He whacked 26 not out in 13 balls.

Australia were never in the hunt in the chase and were rolled over for 111 in 17.1 overs. Tim Southee had David Warner bowled for 5. Aaron Finch (13) and Mitchell Marsh (16) showed promise briefly. Eventually, both fell to Mitchell Santner and Tim Southee respectively.

Glenn Maxwell top-scored with 28 off 20, while Pat Cummins was last man out for 21 off 18. The Australian scorecard made for sorry reading as Marcus Stoinis (7), Tim David (11) and Matthew Wade (2) also failed. For New Zealand, there were some terrific bowling performances. Tim Southee finished with 3 for 6, Mitchell Santner claimed 3 for 31. Trent Boult picked up two towards the end to finish with 2 for 24.

Reflecting on the win, Kiwi skipper Williamson described it as was one of those days. He elaborated, “An outstanding day, the openers set the tone, lots of contributions right through the batting and that was a very good score on this pitch. The bowlers then did well and were well supported in the field. Everyone know their roles in this team, we knew about the quality of their bowling (Australia's), took the game deep and we were very clinical in what we needed to do.”

Australian captain Finch admitted that the Kiwi opener set the tone. He said, “They certainly did, they set the tone in the first 4 overs and we didn't recover. Needed a big start, that didn't happen and we were outplayed completely. He got off to a flier (on Finn), we needed early wickets which didn't happen and when we chased, we lost too many wickets, we weren't good enough with the net run-rate taking a bad hit.”