We weren't up to it: Eoin Morgan on Bengaluru shocker

England captain Eoin Morgan lamented the poor batting effort from this team during the third T20 against India at Bengaluru on Wednesday. England suffered a rather spectacular collapse

England captain Eoin Morgan lamented the poor batting effort from this team during the third T20 against India at Bengaluru on Wednesday. England suffered a rather spectacular collapse, losing eight wickets for as many runs as India crashed England by 75 runs. Yuzvendra Chahal was the star of the show for India with 6 for 25 while Jasprit Bumrah chipped in with three wickets as well. The defeat followed the 1-2 loss in the ODIs, which was preceded by the 0-4 drubbing in the five-match Test series.

Reacting to the defeat, Morgan told reporters, "I can't put my finger on it. We haven't produced a batting performance as bad as that in two and a half years. We pride ourselves on our batting and it's been our strong suit for a long time but our bowlers have outperformed our batters." 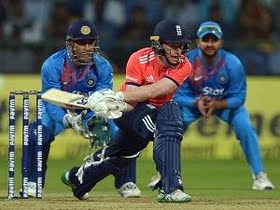 After fifties from Suresh Raina and Mahendra Singh Dhoni powered India to a 200 plus score, England were decent in chase, at 119-2, only to crumble in unexpected manner after Chahal took out Morgan (40) and Root (42) off consecutive deliveries. "We committed the cardinal sin of losing two in players in one over and the allowed India to build pressure. We weren't up to it at all. It's really disappointing," said Morgan.

"Take your hat off to India. They played well and put in a performance worthy of winning the series. We weren't good enough to win this series," Morgan candidly admitted.