KP, Monty have India staring at an embarrassing defeat at Wankhede

India are on the brink of an embarrassing defeat in the Second Test at the Wankhede Stadium. The hosts’ eagerness to play on a square turning pitch to trouble the English batsmen has backfired completely and an inevitable defeat is looming large early on Day 4.

India are on the brink of an embarrassing defeat in the Second Test at the Wankhede Stadium. The hosts’ eagerness to play on a square turning pitch to trouble the English batsmen has backfired completely and an inevitable defeat is looming large early on Day 4. Monty Panesar ripped India apart once again to leave them tottering along at 117 for 7 by the close of Day 3. The lead that India has is just 31 runs!

It was an eventful third day’s play which saw as many as 15 wickets going down after the dominating partnership between Alastair Cook and Kevin Pietersen. It seems that this English batting duo might have played on a completely different pitch. India began its second innings with a deficit of 86 runs and in the 8th over lost the big wicket of Virender Sehwag (9) who tamely edged a turning ball from Monty to the slip. First innings centurion Pujara (6) was also gone cheaply, caught bat pad off Swann with India in deep trouble at 37 for 2. 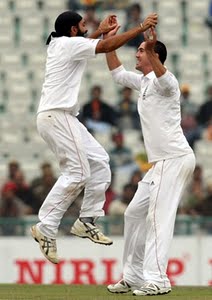 Sachin Tendulkar came into the middle to prove that he is still worth to continue playing at this level at the age of 39. The veteran player seemed to be coming in terms of the pitch until a deadly armer from Monty had him plumb infront on the backfoot. Tendulkar’s enjoyment of the game lasted 19 balls which yielded 8 runs. India then lost Virat Kohli (7) to a full toss from Swann which instead of being hit for a boundary was caught at mid off. Another strokemaker Yuvraj Singh succumbed to the spin, as he came down the track to defend but the jumping ball from Monty hit his glove and flew to shortleg to leave India at 78 for 5.

Skipper Dhoni joined Gambhir and got his team into the lead but was soon out edging Monty into the slips with just 92 runs on the board. By the close of play, Monty swallowed another wicket to complete a second 10-wicket haul of his career when R Ashwin got caught at covers trying to hit his second six. The only consolation for India all this while in the 33 overs was the fighting spirit shown by opener Gautam Gambhir, who survived the torrid session, and remained unbeaten with 53 (from 109 balls with 5 fours). Monty Panesar claimed 5 for 61 in 16 overs while Swann complemented him with a couple of important wickets.

Tea Report: England have been bowled out for 413 just 10 minutes before the scheduled Tea Break. The visitors with that have finished with a crucial lead of 86 runs. It was a collapse for sure after Pietersen’s dismissal with England losing its last four wickets with the addition of just 7 runs in the space of two overs!

The post lunch session saw Samit Patel walking along with Kevin Pietersen. There was some controversy in the Bairstow dismissal as replays showed that the ball had hit the chest of the catcher Gambhir and then rebounded to hit the helmet grill before landing down into the hands. According to the Laws, that was supposed to be an unfair catch but the Umpires weren’t aware of it and after the completion of the lunch break, India did not recall Bairstow back onto the ground.

England got a fine partnership after Tea which was broken by a rejuvenated Pragyan Ojha who suddenly was extracting plenty of turn and bounce. Ojha forced Samit Patel (26 from 42 balls with 4 fours and a six off a top edged hook off Zaheer) in the 109th over to edge one of those jumping deliveries to slip. It was the end of a 59-run stand which took England into the lead. Four overs later, Ojha got the big scalp of Pietersen (186 from 233 balls with 20 fours and 4 sixes) when the right hander attempted a flamboyant square drive on the up to a flighted turning delivery and the resulting thick edge was nicely held by MS Dhoni.

After KP’s exit, India saw the end of Matt Prior (21) through a run out thanks to the Dhoni-Kohli combination. Harbhajan who has been wicketless got Stuart Broad caught bat pad at silly point and then had Anderson lbw to an armer on the backfoot. The last wicket was taken by R Ashwin who got Monty Panesar slog sweeping into the hands of deep mid wicket. India’s hero was Pragyan Ojha who took 5 for 143 in 40 overs.

Lunch Report: England are on top in the Second Test at 298 for 4 in 94.3 overs with the deficit coming down to just the 29 runs. India are back in business though with Pragyan Ojha removing Jonny Bairstow (9) at the stroke of lunch with the right hander closing the face of the blade to work one against the turn and got caught off a leading edge by silly point. England still have Kevin Pietersen looking in command and toying the Indian bowlers with his 138* (from 178 balls with 17 fours and a six).

Most of the morning session was dominated by the overnight pair of Alastair Cook and Kevin Pietersen. Both the batsmen recorded their 22nd Test century one after the other. It was only a few minutes before lunch did India get their breakthrough when R Ashwin got his flatter drifter to turn away with bounce to force a thin edge in Alastair Cook’s forward defence. The English Skipper departed after a well made 122 (from 270 balls with 13 fours and a six). Cook along with Pietersen added 206 runs and made India to wait for as many as 53 overs to break their partnership.

Build Up to Day 3: It is going to be a crucial morning session on Day 3 at the Wankhede Stadium in Mumbai as the result of this Test Match will be depending on its outcome. England are well set at 178 for 2 with 150 more runs to score to get into the lead. The visitors would be hoping that Cook and Pietersen would continue from where they had left in the evening session yesterday. India on the other hand will have to dismiss Pietersen as quickly as possible for the simple reason that the tall right hander has lots of shots to take the game away. The pitch has a bit more of grass and thus it should be quicker and should aid more bounce for the spinners.