India lost significant ground on Day 3 of the deciding Test against Sri Lanka at the SSC in Colombo on Sunday. First, the Indian bowlers allowed Sri Lanka to claw back from a precarious 47 for 6 to post a competitive 201

India lost significant ground on Day 3 of the deciding Test against Sri Lanka at the SSC in Colombo on Sunday. First, the Indian bowlers allowed Sri Lanka to claw back from a precarious 47 for 6 to post a competitive 201. They still managed to gain a decent lead of 111 courtesy Ishant Sharma's rare five-for. But then, they lost three wickets for next to nothing to give away a significant part of the advantage. Dhammika Prasad cleaned up first-innings centurion Cheteshwar Pujara in the very first over. Nuwan Pradeep then dismissed Lokesh Rahul and Ajinkya Rahane cheaply to leave India reeling. The visitors ended the day on 21 for 3. 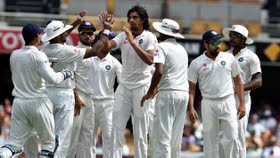 After India had been cleaned up for 312 earlier in the day, Cheteshwar Pujara carrying his bat, the Indian pacers really got into the Lankan batting. The first six wickets were back in the hut for under 50, but what followed was a sensational fight back. Kusal Perera, who was making his Test debut, starred with a smart half-century, and added 79 for the seventh wicket, in a fruitful partnership with Rangana Herath. Perera showed no nerves on debut, and was prepared to take on the fast bowlers, even though the opposition was on top. His quick fifty subdued the Indians, and by the time he was dismissed, Sri Lanka were back in the game.

The lower order continued to frustrate the Indian attack. Herath who is known for his fighting abilities with the bat, once again displayed his tenacity under tense circumstances. In fact, it was his presence that made the task easier for debutant Perera. Together, they put India to the sword literally. Herath was unlucky to be dismissed one short of a half-century, caught behind off Ishant Sharma's bowling. But, he had done his job for sure. The Indian bowlers' struggle against the tail though was not restricted to the two. Prasad, who had to retire hurt, after being hit on the glove, returned to smash a quick 27 to take Lanka past 200.

Things were completely different earlier in the day as Ishant and even Stuart Binny were all over the Lankan top and middle order. Bad luck also did not help the hosts' cause. Upul Tharanga, asked to open on comeback, edged behind the wickets, but was given out even as replays cleared showed it to be a no ball. Umesh Yadav then sent back Kaushal Silva with a short one. But, Dinesh Chandimal, who also beginning to look good, was done in by poor umpiring. He was given lbw to Binny even as the ball seemed to be heading over the stumps. Ishant got Angelo Mathews and Lahiru Thirimanne to edge either side of lunch while Binny induced a loose shot from Dimuth Karunaratne.

Lanka's recovery though was as sensational as their collapse, and it continued as they headed in to bowl. In the very first over, Prasad squared up first-innings centurion Pujara, and had him back in the hut for a duck, clean bowled. For the second time in the match, Rahul failed to cover the line of the ball, and had his stumps disturbed. Only the bowler was different this time -- Nuwan Pradeep. The bowler went on to trap Rahane, who again came in at number three, lbw for the second time in the game. Virat Kohli and Rohit Sharma survived some tense moments, but they have a massive task at hand, if India are to win the Test from here.