The following is the statement released by Mark Boucher, the South African legendary Wicket Keeper, who retired from Cricket following an accident during a tour match of the Proteas in England. Boucher, who was as usual doing his wicket keeping duty got hit on his eye nastily when a bail flew off the stumps which were disturbed by Imran Tahir's googly.

The following is the statement released by Mark Boucher, the South African legendary Wicket Keeper, who retired from Cricket following an accident during a tour match of the Proteas in England. Boucher, who was as usual doing his wicket keeping duty got hit on his eye nastily when a bail flew off the stumps which were disturbed by Imran Tahir's googly.

IT was with many emotions that I left England more than 3 weeks ago. Although it was common knowledge that Lord’s was going to be my last Test match, this injury brought that about earlier and I left England suddenly for an uncertain future regarding my health. 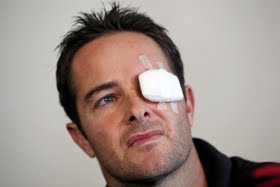 It has been a difficult time for me mentally and physically. I have lost the lens, iris and pupil in my left eye. There was severe damage to my retina. I have had 2 major operations and 4 blood draining operations in the past 3 weeks and physically, at times, I have been in a lot of pain. I believe I am in good hands with my eye specialist and I accept that the healing process is a long one and that attaining some vision in my left eye will take some time and a lot of patience.

It does get uncomfortable at times and being a sportsman, I want to be active and outdoors but, without a pupil, I find any amount of sunlight very harsh and have thus been restricted to the confines of my home.

It is unlikely that I will play any professional cricket again in the near future, which is very unfortunate as I was looking forward to contributing as a player for the Cobras. The risk of additional damage to my left eye or even damage to the other eye, doesn’t warrant it.

I have been receiving a lot of questions about life after cricket for Mark Boucher. As my retirement was imminent, I had been in the planning stages of a couple of projects. Right now, I can think of nothing better than to follow my passion which is wildlife and I am proud to announce that together with SAB and its Castle Lager brand, with which I have had a long relationship that started when I began playing cricket for SA, we are in the process of setting up the SAB Boucher Non-Profit Company. The company aims to help in the fight against Rhino poaching in South Africa and Africa. I will be integrally and actively involved in raising funds through the ‘Our Rhinos in Safe Hands’ campaign, which will be launched in the next few weeks.

In addition, Jacques Kallis and I have launched our own wine label – The Innings – and we are really pleased that it appeared in some local stores for the first time this past weekend and that sales have been great. These are 2 projects that I will be working on while continuing to focus on my healing and I look forward to exploring the other amazing opportunities as, and when, my healing allows.

I have been overwhelmed by the incredible support I have received and I would like to say a few thank you’s. To you, the Media, thank you for respecting my privacy and for being so supportive in your reporting. To my fans, fellow cricketers from around the world, sportsmen and women from other sporting codes, businessmen, politicians, neighbours, thank you for taking the time to show me your concern.

Thank you to CSA and SACA for standing by me, to the Cobras for supporting me and my sponsors, Adidas, Gunn and Moore, Oakley and Blackberry for your support now and during my career;

Thank you to my friends for popping around during this time and lightening my darkened house;

Thank you to my girlfriend Carmen for taking on nursing as a second job and my manager Donne for her continual support.

Doc Moosajee – thank you for being at my bedside throughout my first night in hospital, for flying back with me to SA and for continuing to check in on me day in and day out.

To the Proteas’ Castle Lager squad – thank you for the amazing memories – Switzerland will be right up there with the best of them and thank you for being with me during my darkest hours.

To my Family, thank you for being my greatest supporters and for always being there for me during my career and especially for being here for me now.

Finally, I have had a lot of messages of sympathy. Although I appreciate the sentiments expressed, I don’t want people to feel sorry for me. Injuries happen and this could have happened earlier on in my career. I am incredibly grateful for the length of career that I have had and the amazing things I have experienced and people I have met during that time.

This is just another challenge in my life and something that I will be working to overcome.