India found the going tough on the first day of the warm-up game against New Zealand at Hamilton under conditions that favored the bowling side. After deciding to bat first

India found the going tough on the first day of the warm-up game against New Zealand at Hamilton under conditions that favored the bowling side. After deciding to bat first, India found themselves at an embarrassing 5 for 3 before being rescued by Cheteshwar Pujara and Hanuma Vihari.

The duo of Pujara and Vihari featured in a fighting 195-run stand for the fifth wicket as India recovered rather commendable. The lower order again crumbled though as India were bowled out for 263. While Pujara was dismissed for 92, Vihari completed his century off 182 balls. Soon after, he retired on 101.

Earlier, India got off to a horrible start as Mayank Agarwal, Prithvi Shaw and Shubman Gill all fell cheaply. Scott Kuggeleijn sent back both the openers. Shaw was sent back for a duck in the first over itself while Agarwal's poor form continued as he managed only 1. Gill then fell for a golden duck caught behind off the same bowler. 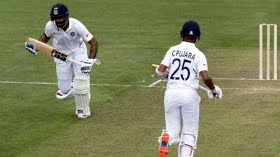 Pujara and Ajinkya Rahane (18) then came together and looked to be forming a partnership. However, just when it seemed like India were getting some sort of control over the conditions, Rahane fell to Jimmy Neesham. The scorecard read 38.

Pujara and Vihari slowly rebuilt the innings as India did not lose a single wicket in the post-lunch session. As the pitch eased out, the duo began playing their shots. While Pujara hit 11 fours and a six, Vihari was more aggressive, smashing three sixes and 10 fours.

Just when Pujara looked set for a hundred, he top-edged one-off Jake Gibson to perish for 92. Rishabh Pant's struggles with the bat continued as he tried to take on Ish Sodhi, but failed.

India's innings soon ended at 263 as the lower order failed to contribute much. Kuggeleijn and Sodhi were the most successful bowlers for New Zealand with three wickets each. Indian captain Virat Kohli did not bat in the game.

India clinched the five-match T20I series 5-0 while New Zealand hit back to clinch the ODIs 3-0. The teams will now feature in a two-match Test series starting at Wellington on February 21.