A superb partnership between centurion Tillakaratne Dilshan and Angelo Mathews saw Sri Lanka clinch the rain-affected Third ODI at Pallekele by 7 wickets. The hosts have now got a 2-0 lead in the 5-match ODI Series.

A superb partnership between centurion Tillakaratne Dilshan and Angelo Mathews saw Sri Lanka clinch the rain-affected Third ODI at Pallekele by 7 wickets. The hosts have now got a 2-0 lead in the 5-match ODI Series.

Asked to bat first after losing the toss, New Zealand were struggling while rain interrupted their innings twice. However, a spectacular finish from opener BJ Watling who carried his bat through for an unbeaten 96* (from 88 balls with 12 fours) saw the Kiwis finishing at a strong total of 188 for 6. Their innings was first cut short to 48 overs and then to 33 overs after the second rain break. Sri Lanka somehow lost the plot after having the Kiwis under the mat at 49 for 4 in the 17th over and at 105 for 5 in 25 overs at a later stage. 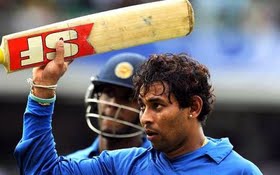 It was a stiff target for the Lankans of 197 runs as per the D/L Method in 33 overs. The Kiwis reduced them to 73 for 3 in the 15th over but failed to sustain the pressure because of the heavy dew that made it tough for its bowlers. Opener Dilshan cracked away with an unbeaten 14th ODI century. He scored 102* in 95 balls with 12 fours and a six while putting on a match-winning stand of 127 runs for the unbroken third wicket with Angelo Mathews (54* from 47 balls with 7 fours). Sri Lanka got to the target with 11 balls to spare.

Toss and Teams: Sri Lanka have won the toss and asked New Zealand to bat first in the Third ODI at Pallekele. Both the teams are well prepared mentally that this match too is going to be affected by rain and thus the D/L Method will come into play. The Lankans have gone in with an unchanged side while the Kiwis have made two changes with Brendon McCullum and Jacob Oram coming in for Andrew Ellis and Ronnie Hira.