Sachin Tendulkar latest dismissal, bowled cheaply for the fourth time in five innings, is sure to pop up the question in fans mind. Is the great man well past his prime, but is still carrying on, merely hoping he can do an encore of his past laurels. Without being too harsh on the man who recently completed 23 years in international cricket...

Sachin Tendulkar latest dismissal, bowled cheaply for the fourth time in five innings, is sure to pop up the question in fans mind. Is the great man well past his prime, but is still carrying on, merely hoping he can do an encore of his past laurels. Without being too harsh on the man who recently completed 23 years in international cricket, one only has to look at his figures since he last scored a Test century, nearly two years ago, to understand why Tendulkar’s continued presence in the Indian side is bound to be questioned. 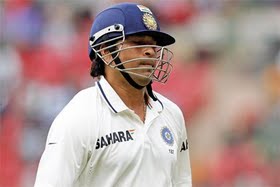 The 39-year-old Tendulkar raised his last Test century against South Africa at Cape Town in January 2011. His 146 was a wonderfully compiled knock, which was preceded by another magnificent, unbeaten 111 at Durban. Since though the great man has batted in 27 innings but is yet to cross the three figure mark. He came close on three occasions, making 91 at The Oval, 94 in Mumbai against West Indies and 80 against Australia at Sydney earlier this year, but on each occasion he fell short of the lankmark, the nerves even getting the better of the man who has 100 international hundreds to his credit. As for his other knocks, he has rarely looked anywhere close to the Tendulkar of old.

Tendulkar’s recent scores tell a story in itself. Since the 80 at Sydney, his sequence of scores read 15, 8, 25, 13, 19, 17, 27, 13 and 8. Even more disturbing has been the fact that he has been bowled in four out of his last five innings, a perceptible proof that his reflexes have slowed down and also of the fact that he isn’t able to read the line of the delivery like he used to do at his peak. What Tendulkar has been going through is pretty comprehendible considering his age. The problem is the man himself continues to remain in self-denial mode.

The story in ODIs too hasn’t been too different for Tendulkar. Between his hundred in the World Cup at Nagpur against South Africa in March last year and the forgettable one against Bangladesh at Dhaka in March this year his sequence of scores read 2,53,85,18,2, 48, 15,3, 22, 14, 39 and 6. The hundred he scored against Bangladesh, his historic hundredth ton in international cricket, was a laborious one. As he approached his hundred, Tendulkar began feeling the pressure and his strike rate slowed down considerably. It was one of the reasons India failed to put up a massive score, although poor bowling was the bigger culprit in India’s loss.

Tendulkar might still come up with a reasonable knock in the second innings at Wankhede, his home ground. That however wouldn’t signal his return to form. There have been clear signs to indicate that Tendulkar’s time is all but up. The latest dismissal at the hands of Monty Panesar only ingeminated the fact. The sooner Tendulkar understands the same, the better it will be for Indian cricket and the sake of the great man himself.