The Fourth ODI at Ranchi was abandoned after relentless rain in the evening which abruptly cut short India’s promising run chase.

The Fourth ODI at Ranchi was abandoned after relentless rain in the evening which abruptly cut short India’s promising run chase. India was going great guns at 27 for 0 in 4.1 overs chasing Australia’s 296 when rain settled down in the ground for the second time in the match. Shikhar Dhawan, in particular was looking aggressive with his 14* from 12 balls with 3 fours. His partner Rohit Sharma looked good as well with his 9* from 13 balls.

The Aussies stay ahead in the 7-match series with a 2-1 lead. The next match of this series will be played at Cuttack on the 26th. 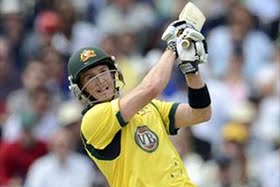 Australia Batting: Fabulous knocks from George Bailey and Glenn Maxwell lifted Australia from an otherwise modest total to 295 for 8 on a pitch that has aided the seam bowlers and also the spinners. Both the batsmen missed out on their respective centuries having done the hard working of getting into the 90s.

Mohammad Shami led the Indian attack with his extra pace of 140 kmph and coupled that with lateral movement off the track. Shami went through the backfoot defenses of Aaron Finch (5) with one that skidded through with a nip back in the 2nd over. Four overs later, Shami had a short of length delivery seam away with steep bounce and Phil Hughes (11) poked at that to give a sharp catch to MS Dhoni. Rain interrupted the proceedings for about 30 minutes and when play resumed, Shami went through the gate of Shane Watson to beat an off drive to take his third wicket.

The visitors were on the backfoot at 32 for 3 in 8 overs and some poor bowling from R Vinay Kumar let the Aussies off the hook. Skipper George Bailey, who was put down edging Shami to Kohli in the slips, was Australia’s savior. He lost a partner in Adam Voges (7, lbw after missing a sweep shot to a straighter one from Ashwin) in the 15th over but got Australia back in the game with a terrific stand with Maxwell.

India lost the plot as the attacking Bailey and Maxwell took Australia to a perfect launching pad before the slogs. It was only in the 38th over when the 5th wicket partnership was broken with George Bailey (98 from 94 balls with 7 fours and 3 sixes) top edging a pull off Vinay to deep mid wicket. It was a huge relief for India as the 5th wicket stand had pounded them for 153 runs.

The hosts fought back after their breakthrough taking the wickets of Brad Haddin and Glenn Maxwell in the space of nine balls. Haddin (3) got bowled after missing a big hit off Jadeja while Maxwell (92 from 77 balls with 6 fours and 5 sixes) was lbw, missing a flick across the line to Vinay. When Maxwell got out, Australia slipped to 238 for 7 in 40 overs and India lost a great chance of wrapping up the innings quickly. James Faulkner with 23* (from 29 balls) and Mitchel Johnson with 25 (from 31 balls) ensured that the efforts of Bailey and Maxwell weren’t wasted as they took Australia five runs short of the 300-run mark.

Shami was superb taking 3 for 42 but his remaining two overs were not used by MS Dhoni. Vinay Kumar and Ashwin had a mixed day taking two wickets each but on the expensive side.

Toss and Teams: India has won the toss for the first time in the series and has elected to bowl first under overcast conditions. The hosts have made two changes with Mohammad Shami and Jaydev Unadkat replacing Ishant Sharma and Bhuvneshwar Kumar. Australia have made no changes.

The weather at Ranchi looks gloomy with chances of shower looking good.