Bumrah: Playing alongside Buttler in the IPL helped

Jasprit Bumrah came up with an excellent spell with the second new ball at Trent Bridge on Tuesday, to put India firmly in path of victory.

Jasprit Bumrah came up with an excellent spell with the second new ball at Trent Bridge on Tuesday, to put India firmly in path of victory. His five-for means India need only one wicket to wrap up the Test.

England ended the day at 311 for nine with Adil Rashid and No.11 batsman James Anderson taking the Test into the final day, after a stupendous hundred from Jos Buttler and a hard-fought fifty from Ben Stokes kept India at bay for a session and a half.

Bumrah said playing with Buttler in Mumbai Indians definitely helped him. "I knew Buttler's strengths and weaknesses. Had an idea of Buttler since both of us played for Mumbai Indians. So, I kept those in mind while bowling to him," Bumrah was quoted as saying in The Telegraph. 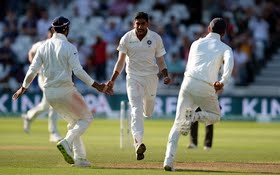 Having missed the first two Tests, Bumrah made the sort of comeback he would have dreamt of. "In white-ball cricket, things are different. You need to outsmart the batsman, while in Tests, it's more about patience and consistency, as both play a crucial role.

"You can't just blast batsmen out in Tests, as proper lines and lengths are important. So, as far as I'm concerned, I just focus on working hard. I make sure I work hard and set specific targets for myself,” he further said.