The men who made ‘Mission No.1’ possible

Vernon Philander: Before the start of the Lord’s Test, the South African fast bowler had done little of note in the series, but by the end of the game, he was the man of the moment, and also the man of the match. Putting up a brilliant all-round show, Philander notched up an attacking half-century in the first innings, his maiden, one and his most crucial till date. It was thanks to Philander’s efforts, and his partnerships with the lower order that the Proteas managed to post a reasonable first innings score after the top order collapsed. Philander then destroyed England in their second innings, with a five-for that negated a heartening fightback from the hosts. In between, he also contributed 35 with the bat in South Africa’s second innings. 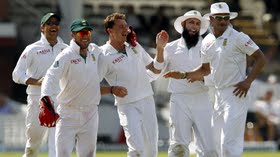 Hashim Amla: The South African made two scores of note in the series, and both of them resulted in South African wins. His majestic 311 at The Oval killed the English bowlers into submission while his 121 at Lord’s gave the visitors the upper hand, after the game was finely balanced midway through the Test. Amla is known to possess a great temperament, and this quality of his came to the fore during both his big knocks in the series. When he got his eye in, the England bowlers could do little to distract his concentration.

Dale Steyn and Morne Morkel: Like always, Steyn and Morkel hunted in pairs. Steyn’s five-for at The Oval came in the second innings, which pushed England towards an innings defeat. This was after Morkel’s four wicket haul in the first innings enabled South Africa to recover from a poor start to the series on the opening day. After struggling at Headingley, both returned to trouble the Englishmen at Lord’s. The hosts had managed to restrict South Africa to a reasonable total following a late-order fightback. But, Morkel and Steyn grabbed four wickets apiece to make sure that England didn’t get away to a huge first-innings total. South Africa dominated from thereon.

Alviro Petersen: His was the knock that gave South Africa the 1-0 cushion going to into Lord’s. Batting first in in the second Test at Leeds, South Africa kept losing wickets at regular intervals, and it was only Petersen’s composed 182 that enabled South Africa to cross 400, a score that took them to safety. Had it not been for Petersen, the result of the Test might have been different, for England’s Pietersen had a beauty of a game. Not only did he come up with a counter-attacking ton, but was also among the wickets. In the end, Petersen’s ton was enough to save South Africa the blushes.