Big-hitting Aussie batsmen Glenn Maxwell and David Warner smashed whirlwind 70s as Australia recovered from a poor start to chase down a tough target of 205, against South Africa at Johannesburg on Sunday

Big-hitting Aussie batsmen Glenn Maxwell and David Warner smashed whirlwind 70s as Australia recovered from a poor start to chase down a tough target of 205, against South Africa at Johannesburg on Sunday. Maxwell and Warner featured in a brilliant 161-run stand for the fourth wicket as Australia recovered from a precarious 32 for 3. Both fell within a couple of deliveries off each other, but had done enough to ensure Australia squared the series. Earlier, South Africa posted an imposing 204 for 7 batting first, Faf du Plessis leading from the front with 79 from 41 balls, with Quinton de Kock contributing 44.

Warner and Maxwell joined hands in the 6th over, with Australia in big trouble. But, the fact that they had no other option but to keep getting the big ones worked in their favour. The eighth over, bowled by David Wiese, which went for 15 gave Australia some momentum, Maxwell whipping a boundary to short fine leg, and then lofting one over long off for a maximum. The runs kept flowing as Warner slog swept Imran Tahir for a six. Du Plessis continued with Wiese, and was made to pay for it, Maxwell hit him for consecutive fours before Warner pulled a slower ball over deep midwicket for six.

For the next couple of overs, things were a bit quiet, but Wiese’s last over gave Australia back the momentum. Maxwell launched Wiese over long on and deep square leg for big sixes, and in between reverse ramped in for a four. A poor piece of captaincy from du Plessis, as 18 came from the over, and Wiese ended with 0 for 58. Warner then slog swept and smashed Tahir for sixes over deep midwicket. Maxwell fell to Chris Morris for 75 from 43, and Kagiso Rabada then cleaned up Warner for a 40-ball 77. James Faulkner and Mitchell Marsh, however, saw Australia home. 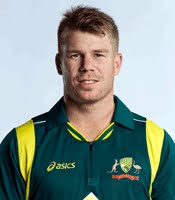 Earlier, South Africa posted an impressive 204 for 7 on the board. AB de Villiers played on to John Hastings for 13, having hit the bowler for a six. De Kock and du Plessis then went on an all-out attack as Australia’s bowlers were made to suffer. Marsh’s first over was drilled over extra cover, and then flicked into deep square leg for a four and a six. De Kock then smashed Josh Hazlewood for two fours and a six as 19 runs came off the sixth over. De Kock chopped on to Faulkner for 44 from 28, but du Plessis carried on take the team close to 200. The eventual score though would have been impossible without David Miller’s blistering 33 from 18 balls.

Australia’s chase began in the most unwanted fashion as Aaron Finch was yorked by Rabada in the first over. Dale Steyn then got the big wicket of Steven Smith, but the wicket belonged to the fielder as Rabada took a stunning catch at third man, striking his right hand out even as he was running. In the same over, Shane Watson was also sent back as JP Duminy, this time, held one over his shoulder at point. South Africa were very much in the ascendancy at that stage, but Maxwell and Warner were too good on the day.