Warner hit a magnificent 85*(58) and got great support from Saha as the pair chased down 150 without breaking a sweat. With that win, SRH qualified for the playoffs and KKR are now out of the tournament.

A win in this match would have ensured SRH a ticket to the playoffs and Warner made sure everything went right in the match for his side. The target in sight was 150, and the start they got from their openers was brisk. Saha smashed three fours and a six in the first three overs, and Warner followed it up with three consecutive fours in the 4th over against Pattinson. Mumbai were badly missing their premier pacers Bumrah and Boult, as 56 runs came in the batting powerplay without the loss of any wickets.

Even Rahul Chahar wasn’t able to challenge the batsmen, with Saha manipulating his spin to a great deal. He swept the spinners in the gaps and lofted them effortlessly. Rotation of strike was another striking feature of the pair’s batting. By the 12th over, both of them had gotten to their respective fifties, and the equation was down to a very gettable 40 from 48. Even then, SRH batsmen didn’t get carried away and played responsibly. They were targeting one boundary per over given the equation. The spinners weren’t able to grip the ball with the huge amount of dew on offer. Krunal Pandya went for 37 in his 3.1 overs, as David Warner thrashed him for a boundary to do the final riots and win the match by 10 wickets with nearly three overs to spare. 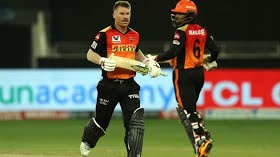 Earlier in the match, it was Rohit who walked out to bat after a while, alongside de Kock. SRH bowlers were on a mission and that intent showed in the field. A lazy loft by Rohit found Warner at mid-off in the third over itself. De Kock took Sandeep apart by smashing him for 16 in the first three balls of the 5th over, but the bowler had the last laugh as he bowled de Kock the very next ball. Ishan Kishan had come in and was finding it tough to get going, even as Suryakumar Yadav was going about his business smoothly.

MI had reached 78-1 at the end of 10 overs, though the spinners were trying to keep it tight. There was a deliberate plan to attack Rashid, but that worked out only for a bit. Then came the mini collapse. MI lost three wickets in seven balls, as Nadeem scalped Yadav and Krunal Pandya, and Rashid picked up Saurabh Tiwary. That brought the run rate down and boundaries had dried up.

Sandeep came back in the 17th over to pick his third of the match, a struggling Kishan. With Coulter Nile also getting out cheaply, it was all down to Pollard, who gave his side a fighting total. He smoked four sixes in six balls, as Natarajan was severely punished by the WI limited overs skipper. They had set a target of 150, which was never going to be enough for the spirited SRH.