Australia did not head into the ongoing Ashes series as favourites. Hence, it should not be surprising that they are 3-0 down in the contest with only The Oval Test to go. But yes, they would be disappointed at the kind of performances they have put in over the four matches.

Australia did not head into the ongoing Ashes series as favourites. Hence, it should not be surprising that they are 3-0 down in the contest with only The Oval Test to go. But yes, they would be disappointed at the kind of performances they have put in over the four matches. Except the game at Old Trafford, they never dominated a Test. In fact, they conceded the advantage gained in all the other Tests, allowing England to fight back from tough positions. And, unlike the visitors, England did not let the advantage slip.

What will hurt Australia the most is the fact that the senior players in the team have failed to deliver. Shane Watson has been the biggest disappointment of all the players. His scores in the series are the best indication of his struggles –13 and 46 at Nottingham, 30 and 20 at Lord’s, 19 and 18 at Manchester and 68 and 2 at Chester-le-Street. As many as four times in the series, he has been dismissed lbw, plonking his foot forward and coming in line of the ball. England have exposed his weakness to the hilt, and in spite of being aware of his flaw, Watson hasn’t managed to find a way out of the mess. 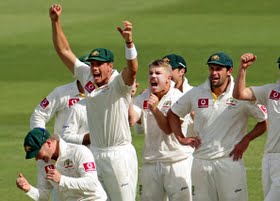 Usman Khawaja has been another player who has been exceedingly below par. He may not be as experienced as Watson, but he is no novice either. Khawaja has already featured in nine Tests for Australia, but has managed only two half-centuries. He was unlucky with one dismissal when he was given out erroneously in spite of the DRS in place. But, over the course of the three Tests, he has been highly disappointing. After Ed Cowan batted at number three in the opening Test, Khawaja has occupied the position in all the other matches. But he has registered only one half-century, at Lord’s. At Manchester, he made 1 and 24 and at Chester-le-Street 0 and 21.

It may seem unfair to point a finger at Michael Clarke since he came up with a sensational hundred at Old Trafford. But, the harsh reality is that if you take that innings away, the captain hasn’t done much of substance. In the opening Test he made 0 and 23, at Lord’s he registered scores of 28 and 51 while at Chester-le-Street he managed only 6 and 21. The figures aren’t bad, but considering he is the best batsman in the side, and also their leader, the numbers do not quite add up.

In the bowling department, the pacers like Peter Siddle and Ryan Harris have bowled their hearts out, and have been rewarded appropriately. The problem is that, unlike England, who have in their ranks Graeme Swann, Australia do no possess a quality spinner. Ashton Agar expectedly turned out to be too raw, and Nathan Lyon is an honest trier at best. It would be fair to concludethat the lack of quality in the Australian camp has contributed in a big manner to their Ashes downfall.