England will look to clinch the fourth and final Test starting at Oval on Thursday, and in the process claim the series with an emphatic 3-1 scoreline. Of course, even a draw would be enough to for them to secure the series.

England will look to clinch the fourth and final Test starting at Oval on Thursday, and in the process claim the series with an emphatic 3-1 scoreline. Of course, even a draw would be enough to for them to secure the series. But, unlike English teams of the past, this outfit is a lot more positive. Hence, they will be pushing for a win, to add to their impressive victories at Old Trafford and Edgbaston, by 330 and 141 runs respectively. Pakistan, on other hand, will be under pressure, having faltered in the last two matches. The Lord's victory now seems like a thing of the past. They had the upper hand more than once at Edgbaston, but failed to consolidate.

Pakistan have been found wanting because they have been one short in both the batting and bowling department, primarily because they lack an all-rounder in the mould of Moeen Ali. Hence, there are chances that Pakistan might risk a debutant in Iftikar Ahmed, a middle-order bat, who can also chip in with his off-spin. It will be a big task for Ahmed if chosen, but the lack of runs from a couple of their senior batsmen have left the visitors in a quandary. If Ahmed plays, Pakistan will have to leave out either Younis Khan or Mohammad Hafeez. Going by pedigree, Khan should stay, but dropping Hafeez would warrant a change in the batting order.

There are some problems for Pakistan in the bowling department as well. Leggie Yasir Shah began brilliantly at Lord's, picking up ten wickets in the match, but since he has been found wanting, as England's batsmen have raised their game. If Pakistan want to square the series at The Oval, Yasir will have a big role to play. The series began with plenty of attention on Mohammad Amir. And, while he has done a reasonable job thus far, his comeback has not been as threatening as expected. Rahat Ali and Sohail Khan flourished in phases, but have lacked desired consistency.

England have had their problems, but their strengths outweighed their weaknesses at Edgbaston. The all-round success of Moeen was the biggest takeaway from the third Test. Following lukewarm performances in the first two Tests, the pressure was growing on the all-rounder, but he responded with a fine effort to claim the man of the match award. Alastair Cook and Joe Root also continued their good run with the bat. In the bowling, while there were no exceptional individual performances, everyone from James Anderson and Stuart Broad to Chris Woakes and Moeen chipped in to keep Pakistan under the pump. They will be looking to continue in the same vein. 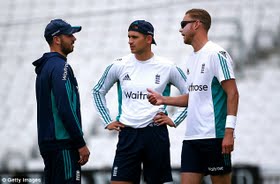 Amidst the euphoria, England still need to build on a couple of areas though. The position of James Vince is definitely under the scanner. His failures could really hurt the team if the likes of Cook and Root fall cheaply. Alex Hales may have got a half century in the previous Test, but he certainly isn't looking all that comfortable out in the middle. And while Gary Ballance has got a couple of good scores, he cannot afford too many failures. In the bowling, Steven Finn will be a subject of debate. He got a couple of wickets in the last innings, but the medium pacer still hasn't been anywhere near convincing.