Aussies all set for Pak challenge

Following the expected win against Afghanistan, the Aussies are now all set to take on Pakistan in the three-match ODI series, starting on Tuesday at Sharjah.

Following the expected win against Afghanistan, the Aussies are now all set to take on Pakistan in the three-match ODI series, starting on Tuesday at Sharjah. Both teams will be keen to get off to a winning start, and even though Australia would believe they have the upper hand courtesy the recent successes they have had against the Asian nation, the conditions at Sharjah will be more Pakistan-like, which should aid the so-called home side. Neither team has had great run going to this series, with the Aussies being felled by England, and Pakistan having a tough time in Sri Lanka. 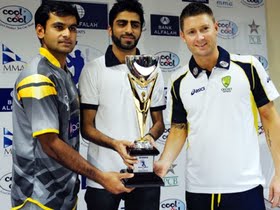 Australia will hold a slight advantage going into the first match, since they have played a game against Afghanistan only days back, and put up a pretty acceptable performance. Matthew Wade opened the batting, and made a hard fought 75. It has been learnt that the Aussie think-tank are rethinking on the strategy, since asking Wade to open and then expecting him to keep wickets for 50 overs might be too tough in such harsh conditions. He did manage the same against Afghanistan, but by the end of the game was clearly drained out. Pakistan will undoubtedly push him harder.

To give breathing space to Wade, Michael Hussey is likely to be moved up the order, to open the innings. This could be a sensible move as Hussey has experience of opening the innings for Chennai Super Kings at the IPL, and has done so quite successfully. Further, the left-hander is adept at rotating the strike swiftly as well as clearing the in-field, as per the demands of the situations. Both these attributes are a must for a modern day opener;Hussey fits the bill perfectly as far as Australia’s present state is concerned. The veteran batsman is also in form, having slammed a 49 against Afghanistan the other day.

In the bowling department, the visitors will heavily depend on their pacers, who did very well against Afghanistan. Mitchell Starc, James Pattinson and Mitchell Johnson, all looked in fine touch and will be keen to continue the good work. That said, their spinners will also play a crucial role. Although Xavier Doherty, Glenn Maxwell and the other part-time spinners aren’t expected to trouble the Pakistani batsmen too much, it is still important that they do a good supporting job, and don’t release the pressure.

As for Pakistan, it will be crucial for their experienced hands to stand up. Misbah-ul-Haq will have to play the big knocks, but he will need support from the likes of Mohammad Hafeez, Shahid Afridi and the impressive Azhar Ali. The match will also mark the comeback of the much-criticised wicket-keeper batsman Kamran Akmal to the team, for the first time since the World Cup semi-final against India. He will have a point to prove for sure. For Pakistan to begin the series on a positive note, they will have to be at their best, else the Aussies would willingly pounce on their weaknesses.