New Zealand lost the fourth ODI to West Indies at St Kitts, and with it the series, despite a wonderfully compiled century from their skipper Ross Taylor, who was returning to action against injury.

New Zealand lost the fourth ODI to West Indies at St Kitts, and with it the series, despite a wonderfully compiled century from their skipper Ross Taylor, who was returning to action against injury. The Kiwi middle-order bat’s 110 encompassed six fours and five sixes, but wasn’t enough for New Zealand to chase down West Indies’ eminently gettable target of 265. Having said that, the instances of hundreds coming in losing efforts is not a rare one. In recent years, there have been a number of such games wherein in spite of a superb ton, the batsman’s team has lost. Here’s a look at some of them: 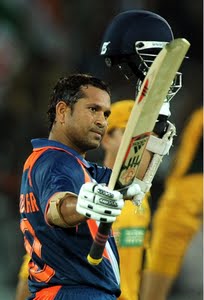 This was the ODI equivalent of the Chennai heartbreak in Tests for Tendulkar. Australia batted first and amassed a mountain-like 350 on board, thanks to Shaun Marsh’s run-a-ball 112 and Shane Watson’s 93. Ricky Ponting, Cameron White and Mike Hussey also chipped in with quick-fire cameos. In reply, India needed something special to match the Aussies’ incredible efforts. And that knock came from the man himself – Sachin Tendulkar. The Indian maestro blasted 175 from 141 balls, a blistering knock which featured 19 fours and four sixes. However, there was little in the form of support for Tendulkar from the rest. India’s next best score was 59 by Suresh Raina. Still, Tendulkar fought alone, and kept India in the hunt, until in the 48th over he fell with India still 19 runs short of the target. India still had three wickets in hand, but crumbed and fell short by a tantalisingly close margin of three runs.

The small venue and batsman’s paradise at Rajkot has always produced big scoring games, but the one being discussed saw mammoth scores from both sides. India made best use of the surface batting first, at least they had though so, amassing a massive 414 on board – Virender Sehwag smashed 146, Sachin Tendulkar 69 while skipper M S Dhoni blasted 72 from 53 balls. If India thought they had done enough to cruise through the second half of the match, they were wrong. Tillakaratne Dilshan matched Sehwag stroke to stroke during his counter-attacking 160. Just like Sehwag, he also found able company, in the form of Upul Tharanga first and then Kumar Sangakkara. However, once Dilshan was dismissed, Lanka collapsed and fell short by three runs.

Those were the days England were still struggling to establish their one-day credentials, and Trescothick’s entry came like a breath of fresh air. The said game was the England opener’s maiden ODI ton, and with little support from his underperforming teammates, it could have come in a winning cause. Batting first, Pakistan were restricted to 242 in spite of Mohammad Yousuf’s (then Yousuf Yohanna) calm 81. England kept losing wickets regularly but for a huge partnership between Trescothick and Owais Shah. Trescothick fell in the last over, and England succumbed to a heart-breaking two-run loss.