Kolkata Knight Riders crumbled from a winning position, set up by Andre Russell's blistering half-century. But, in spite of losing wickets to some crazy running and soft dismissals, they managed to scrape through to a one wicket win off the penultimate ball of the innings. The equation was classic with Kolkata needing one run with last man Sunil Narine at the crease. He and Umesh Yadav managed to scamper across for a leg bye off Anureet Singh to register another win at Eden Gardens, and go to the top of the table. As if has often happened during this season, Punjab came close, but couldn't cross the finish line. 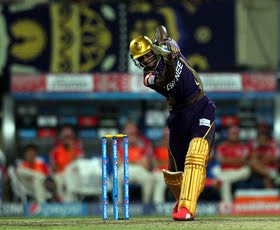 The triumph for Kolkata was built around Russell's 51 from 21 balls. He had earlier conceded 50 runs in his four overs, but more than made amends for it, with his batting. He was especially severe on Anureet Singh, who bowled three full tosses to him in an over, which Russell dispatched for two sixes and a four. In his earlier over, Singh had already conceded 16 to Russell and Yusuf Pathan, who made an important 29.

The big hitters were also severe on Axar Patel, as they looted 24 in one of his overs. The latter got his revenge when he had Russell caught, but the damage had already been done and, in spite of the late flurry of wickets, managed to go past the finish line, and continue their impressive run.

Batting first, Kings XI Punjab managed an impressive 183 for 5 on the board. The performance was thanks to Glenn Maxwell finally getting among the runs with a blazing knock, aided by Manan Vohra and Wriddhiman Saha. Punjab could still have faltered towards the end had David Miller not chipped in with a blazing cameo of 27 from 11 balls. Thanks to the late surge from him, Punjab crossed 180. This was after Sunil Narine troubled them, and finally found his groove with remodelled action, finishing with excellent figures of 4 for 19.

Kolkata were poor in the field as Murali Vijay benefited from three chances. However, he could not ride his luck and, after smashing Umesh Yadav for 18 runs in an over, was rolled over by Narine. Vohra and Saha then steadied the ship to put Punjab in a decent position. However, Narine had Vohra caught and bowled for 39. Maxwell came in and started smashing the ball all around. He and Saha were especially severe on the veteran spinner Brad Hogg, who was taken for 21 runs in an over.

Just as Punjab were preparing for the final assault, Narine again came to the team's rescue. He dismissed both Maxwell, who had smashed 43 from 22 and Saha, who had made 33 from 25, in the 17th over. The double strike once again put Kolkata on top, but Miller ensured that the momentum was seized back. Eventually through Russell's rollicking knock outshone the combined success of Punjab's batting.