Forrest, Clarke help Australia pile up 280 for 6 at Hobart

Peter Forrest scored a maiden century and Skipper Michael Clarke in his comeback after an injury scored a fluent 72 as Australia left Sri Lanka with a difficult target of 281 to win in the Hobart ODI.

Batting first after winning yet another toss, Australia was on the backfoot in the starting overs under some good seam bowling. There was an early wicket to go in the 2nd over when Matthew Wade (5) spooned a slower one from Nuwan Kulasekara to mid off. In the 7th over, David Warner (7) walked back to the pavilion after another failure. This time he was out to a beauty from Farveez Maharoof which was a short of length delivery that nipped away off the seam to force a nick behind.

Australia was on the backfoot at 27 for 2 when Skipper Michael Clarke joined the new no.3 Peter Forrest. The two right-handers batted steadily and ensured that there were no further inroads. As the overs ticked by, the pair took over control and made Sri Lanka suffer. Michael Clarke (72 from 79 balls with 5 fours and 2 sixes) eventually fell in the 39th over looking to launch Angelo Mathews for a boundary but got caught by a forward diving Thisara Perera instead. Clarke added 154 runs for the 3rd wicket with Forrest. 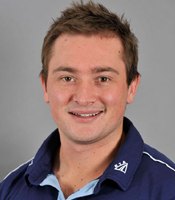 The 26-year-old Peter Forrest playing in his only 4th ODI scored a smooth maiden century and got out soon after he reached that trying to up the tempo. Forrest ended with a score of 104 (from 138 balls with 10 fours and 2 sixes) after hitting Mathews to deep covers in the 41st over. Michael Hussey played a cameo of 21 from 14 balls with 2 sixes to push the Aussies further in the first half of the slog overs.

The finishing touches to the Australian innings came from David Hussey (40* from 28 balls with 2 fours and a six) and Brett Lee (20* from 15 balls with a four and a six) which lifted the hosts to 280 for 6. Farveez Maharoof was the best of the bowlers with 1 for 40 in 10 overs using his nagging slower deliveries to good effect.

Toss and Teams: Australia have won the toss and elected to bat first in the 9th Match of the CB Series against Sri Lanka at the Bellerive Oval in Hobart. Skipper Michael Clarke comes back into the playing XI after recovering from his hamstring injury. He comes in the place of Ricky Ponting whose ODI Career was finished the other day in Brisbane.

The other change in the Australian side is Ryan Harris coming in for Mitchell Starc. Shane Watson has been rested as the 12th man. Sri Lanka who are playing terrific cricket beating Australia and India comprehensively have stuck with the same side.

Pitch and Weather Conditions: The temperature at Hobart is pretty low at 21 degrees C. The last time a Test match was played here, the seamers dominated on a spicy track. However, for the One Dayers, the curator might have made it flat to suit the batsmen.