South Africa crushed India by 10 wickets to win the Durban Test and also the short 2-match Series. The hosts needed just 58 to win after bundling out India for 223 in 86 overs.

South Africa crushed India by 10 wickets to win the Durban Test and also the short 2-match Series. The hosts needed just 58 to win after bundling out India for 223 in 86 overs. South Africa took 11.4 overs to knock out the target with Alviro Petersen scoring 31* and Graeme Smith scoring 27*. Dale Steyn was named as the Man of the Match for taking 9 wickets while AB de Villiers was the Player of the Series.

Earlier, Ajinkya Rahane played a brilliant knock while missing out on a maiden Test century by just the four runs. Rahane ran out of partners in a hurry yet he scored 46 runs all on his own with the tail. It was a career best for Rahane with a score of 96 from 157 balls with 11 fours and 2 sixes. 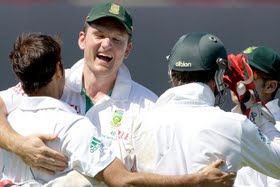 Zaheer Khan was the first to depart post lunch when he was given out lbw, playing outside the line to an arm ball from Peterson. Ishant followed his senior colleague, caught by the keeper, top edging a hook off Steyn to give the South African fast bowler his 350th Test wicket. Rahane was last man out, trying to bring up his ton with a boundary but missing a length ball from Philander to get bowled.

Update at Lunch on Day 5: India are on the brink of a Test and Series defeat after losing five wickets in a disastrous morning session on the final day. The visitors though have avoid an innings defeat with a lead of 7 runs. South Africa need three more wickets to wrap up India’s second innings.

For India, the lone man fighting in the morning session was Ajinkya Rahane, who has scored his 2nd fifty of the match. Rahane is batting on 50 from just 84 balls and has got the tail left with him.

India lost Virat Kohli to the very first ball of the morning. Kohli got a tough one to deal with from Steyn on the backfoot. Although in real-time, it looked as if Kohli had got a nick behind, replays showed that the ball had only brushed the back shoulder. The other overnight batsman Cheteshwar Pujara followed Kohli back in the pavilion just a couple of overs later. Pujara was clean bowled by a beauty from Steyn which angled in but straightened to clip the off stump.

After losing two big wickets in no time, the writing was on the wall for India but a promising partnership between Rohit Sharma and Ajinkya Rahane revived hopes again. Rohit Sharma looked to be batting superbly and was constantly sledged by Dale Steyn. Having seen off the likes of Steyn and Morkel, poor Rohit got out lbw to Vernon Philander to a ball that reversed in with low bounce. Rohit’s fight was cut short to a 46-ball 25.

By lunch, it was sure that the visitors were heading to a defeat as MS Dhoni tamely got out for 15 to Robin Peterson, flicking one on the backfoot into the hands of short mid wicket. Next man in, Ravindra Jadeja fell five balls later, trying to go for his second six off Peterson but only to get caught at extra covers.