Sri Lanka have not been great in ODIs in recent times. They lost to Pakistan the last time they featured in an ODI series. Before that, they were ousted in the quarterfinal of the World Cup

Sri Lanka have not been great in ODIs in recent times. They lost to Pakistan the last time they featured in an ODI series. Before that, they were ousted in the quarterfinal of the World Cup, and had also lost in New Zealand, although they competed, and finished with a 2-4 margin. They would still be favourites against West Indies though, who were crushed by South Africa at the start of the year. Then, they lost to Ireland in the World Cup, and their poor run means, they have also failed to qualify for the Champions Trophy 2017.

Although West Indies will not be high on confidence, one-day is one format where they can be expected to do better than the Tests. Of course, they would be missing the likes of Chris Gayle, Dwayne Bravo and Kieron Pollard, but West Indies must now be getting used to it, at least in the case of the latter two. They would be hoping for the others in the team to rise to the challenge. It will be a difficult task without doubt, but it is also true that West Indies have the talent to pull off surprises if they get their act together.

The first ODI will mark the return of Sunil Narine to the international fold after over a year. In the interim, his action has been remodelled and questioned more than a couple of times. He did play in the IPL, but wasn’t at his best. West Indies would be keen for him to be good shape as Sri Lanka can be ruthless against spin other their day. The batting performance of Carlos Brathwaite and Andre Russell in the practice game would also bolster West Indies’ confidence as they head into the opening ODI at Colombo. 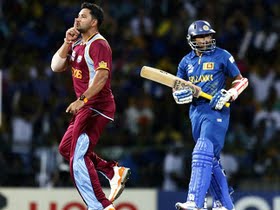 If there is one aspect which would worry Sri Lanka the most, it is definitely the lack of potency of Lasith Malinga. The Sri Lankan spearhead was not in any kind of control at all against Pakistan, and had to be eventually dropped from the final match of that series. The West Indies series would be crucial for Malinga and his international future as he doesn’t have age on his side. Spin will be a crucial weapon in Lanka’s armoury. Sachithra Senanayake and Ajantha Mendis are part of the team, and whoever plays will have a crucial role to perform.

To counter Sri Lanka’s spin threat, West Indies’ batting will need to be at their very best. They don’t have a strong batting line-up, with Johnson Charles and Andre Fletcher opening. Marlon Samuels is arguably the best player of spin in the current West Indies set up, but he is in the worst form of his life. A lot could thus depend on how Darren Bravo bats. With his all-round skills, Russell will remain crucial to West Indies’ fortunes. He can turn a game on his own on a given day, but to win West Indies will need to display consistency unexpected of them.