A fascinating contested is on the cards as an English side, which was rolled over in comprehensive fashion by India, take on West Indies, who are yet untested in the tournament.

A fascinating contested is on the cards as an English side, which was rolled over in comprehensive fashion by India, take on West Indies, who are yet untested in the tournament. Even as England’s easy triumph over Afghanistan was enough to see them through to the Super Eights, the Windies have progressed without having to win a game. They lost to Australia on the Duckworth/Lewis Method and did not get a chance to do much against Ireland owing to rain. They solid batting performance against the Aussies was, however, enough to see them through to the Super Eights on the basis of a superior net run-rate.

Flair is a key element of any West Indian side, and this outfit has plenty of that. In Chris Gayle, they have the most dangerous T20 player in the world, on par with New Zealand’s Brendon McCullum, or perhaps even better. The significant aspect of the explosive left-hander’s game is his consistency in this format of the game. He took little time to come into his own against Australia, carving the bowling to all parts of the ground. Also, there are in-form batsmen like Marlon Samuels and Kieron Pollard to back up Gayle. On his day, Pollard can be as destructive as Gayle.

Apart from their batting, one of the reasons whyWest Indies are being termed among the favourites to lift the crown is their versatile talents. Sunil Narine may not have tasted much success back in England, but he could be quite a handful in these conditions against the same opponents. He needs to be careful of overstepping though. The all-round ability of Dwayne Bravo, who is expected to be fit for the England clash, is also an aspect of West Indies cricket other sides would be envious of. And while Ravi Rampaul and Fidel Edwards are not extraordinarily bowlers, they know their role in the team very well. 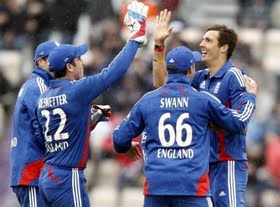 Stuart Broad may try to play down the embarrassment against India, but it would be impossible for any team not to be worried after being bundled out for 90. More than the loss, it must have been the manner in which England batsmen fell one after the other that would have concerned England. If they want to look at the positive side, the answer is pretty simple – the effort came in an inconsequential game. Yet, when England face up to Narine on Thursday, they would hope to put up a much-mended showing.

Despite being routed by India, England’s batting line-up is expected to remain rather familiar. There is no point in chopping and changing just for the heck for it. England have chosen the men anointed to do the job, and now they have to back the players. Everyone from the top six in the English line-up is capable of producing match-winning knocks, but whether they have the aptitude to tackle bigger challenges remains to be seen.

In the bowling department, Samit Patel could replace Tim Bresnan. Given the surfaces in Sri Lanka, his left-arm spinners could prove more handy that Bresnan’s medium pacers, that aren’t likely to do much talking. England would also be expecting a lot from Graeme Swann and the skipper Broad himself.

West Indies would fancy their chances, but England too would be keen to make a point.