Kings XI Punjab, after a great start to IPL 2018, for knocked out following their loss in the last game against Chennai Super Kings

Kings XI Punjab, after a great start to IPL 2018, for knocked out following their loss in the last game against Chennai Super Kings. Reflecting on the season, KXIP coach Brad Hodge hopes Punjab learn from their mistakes.

Speaking about the loss to Chennai, Hodge said in the post-match report, “I think the reality is that MS and his side are in a position to be able to pull those moves and have the confidence of doing it. We know that MS would do that sort of creative stuff and that is why he is a champion and that is why he has got a champion team.” 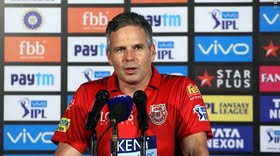 Hodge added Punjab must look to emulate Chennai. “Hopefully over the coming years, whatever group comes together learns those traits and have courage as well, to be able to that with their group and have trust to get the job done,” he added.

Kings XI Punjab started the season with five wins in six matches, but could not maintain the momentum. “Unfortunately we just thought we have not had the opportunity to put together, in games, consistent performance with bat and ball and in field. Those three aspects have been bits and pieces throughout the season,” Hodge concluded.