Rohit suggested slower ball to Bumrah at stroke of lunch

Jasprit Bumrah whose six-for put India in a dominating position in the Melbourne Test has revealed that it was Rohit Sharma, his Mumbai Indians captain, who suggested he should try the slower ball against Shaun Marsh just before lunch.

The move worked perfectly as the Aussie batsman was clueless against the surprise delivery. "When I was bowling there, the wicket had become really slow, the ball had become soft, nothing was happening. The last ball before lunch, Rohit was at mid off. He told me 'you can try a slower ball like you do in ODI cricket'," Bumrah was quoted as staying in an India Today report.

"I thought, 'yeah I can give it a go' as nothing was happening. We thought some of their guys play with hard hands and we wanted to try that and the execution was good on the day. I was trying to bowl a full, slower ball. I thought maybe it will dip or go to short cover. That was the plan and it worked,” Bumrah added. 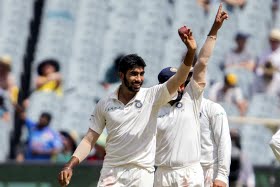 Bumrah’s six wickets saw India clean up Australia for 151. The fast bowler added he was not surprised with his success in Test cricket. “If I don't believe in myself who else will? I always try to back myself. I have played in England, South Africa and Australia, all three different conditions. I haven't bowled in India yet," Bumrah stated.