Australia went into the Test series against Sri Lanka as favourites, and performed very much to expectations on the opening day of the first Test at Pallekele. Winning the toss was about the only thing that Angelo Mathews did right on a tough Tuesday

Australia went into the Test series against Sri Lanka as favourites, and performed very much to expectations on the opening day of the first Test at Pallekele. Winning the toss was about the only thing that Angelo Mathews did right on a tough Tuesday. They were tested by a combination of pace and spin to be outdone for 117. Nathan Lyon and Josh Hazelwood finished with excellent figures of 3 for 12 and 3 for 21 respectively as Sri Lanka failed to stand up to the Aussie challenge. Sri Lanka hit back with two quick wickets, but Steven Smith and Usman Khawaja steadied the ship before rain played spoilsport.

Unlike what the scoreboard suggests, this was by no means a demon of a pitch. Yes, there was some moment for the pacers and turn for the spinners. But, nothing was in the region of unplayable as Smith and Khawaja were to prove later in the day. It was just the fact that Sri Lanka were not good enough to stand up to Australia's challenge. They were put under pressure by some excellent bowling very early in the innings, and succumbed to it. Debutant Dhananjaya de Silva was Sri Lanka's top scorer in the innings, and he made only 24. No partnership for the hosts exceeded 25, and the scorecard almost read like a T20 one.

Australian bowlers were on top right from the start. Comeback man Mitchell Starc was a bit rusty, but it was he who got the first wicket, having Dimuth Karunaratne with one that came back in. Hazelwood then ran through the middle order. He had Kusal Mendis lbw for 8, again with one that came in. Not long after, Kaushal Silva edged him to first slip having made 4. Sri Lanka were 15 for 2, and the third wicket fell with only another three runs added. Angelo Mathews has often rescued the team from such disastrous starts, but even he couldn't do much here. The Lankan skipper fell to left-arm spinner Steve O'Keefe, edging one that bounced, spun and took the edge. 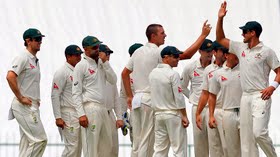 The loss of Mathews brought debutant de Silva to the crease. He showed signs of promise and very early in his innings hit a six off O'Keefe down the ground. At the other end, Hazelwood found some swing to send Dinesh Chandimal back in the hut for 15. Sri Lanka went to lunch at 84 for 5. In the second session, Lanka's collapse was accelerated by Lyon. He turned one enough to have de Silva caught bat-pad for 24. A couple of balls later, he trapped Dilruwan Perera in front for a duck. Kusal Perera was sent back for 20 as he offered no shot to an arm ball. 38 balls were all that the hosts lasted after lunch. In response, they got the Aussies openers, David Warner and Joe Burns early, before Khawaja and Smith restored sanity.